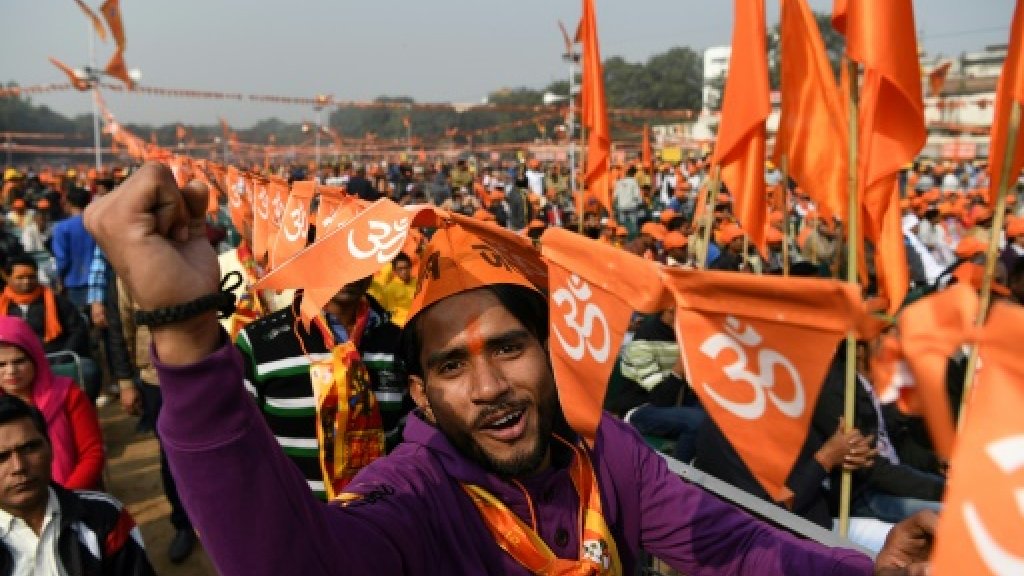 NEW DELHI, Dec 10 . Tens of thousands of hardline Hindu protesters marched in New Delhi on Sunday, calling for a grand temple to be built on the ruins of a destroyed mosque in a flashpoint Indian city.

Trident-waving devotees clad in saffron filled a huge parade ground in the Indian capital under tight security, where speakers warned Prime Minister Narendra Modi they would not let up until the temple was sanctioned.

Some of Modi’s supporters feel the Hindu nationalist leader has not done enough to raise a shrine at a site in Ayodhya, a city believed by many to be the birthplace of the deity Ram.

The site was home to a medieval mosque for 460 years until Hindu zealots tore it down in 1992, kicking off riots across India that left thousands dead, most of them Muslims.

Its future has been tied up in courts for decades but some hardliners want Modi, who is seeking reelection in 2019, to push parliament to guarantee the temple by law.

“The gathering here is telling you that Hindus won’t sit back until the temple is built, and our wishes are respected,” said Champat Rai, the leader of the Vishva Hindu Parishad (VHP) group that organised the protest.

Demonstrators chanting “Praise be to Ram” packed the Ramlila Maidan, a vast ground capable of holding more than 50,000 people, and filled the surrounding streets.

Some carried maces and tridents — weapons traditionally wielded by Hindu gods — and travelled great distances by train and bus to reach the rally.

“We have come here to protect our religion and Hindu pride. We want a temple for our Lord Ram,” Hitesh Bharadwaj, a teacher from Delhi’s satellite city Noida, told AFP. The hardline VHP has applied pressure on Modi in recent weeks, staging a huge show of force in Ayodhya itself last month.

A close ally of Modi’s Bharatiya Janata Party (BJP), the group is spearheading a push to raise the Ram temple, and is calling for more protests as the premier prepares to go to the polls by May.

The BJP was on the margins until the 1980s when its top leaders, including Modi, backed a growing movement for the construction of the Ram temple. Its advocates want parliament to introduce a law bypassing legal hurdles blocking the temple before Modi’s term ends.

The Supreme Court has delayed hearings into the disputed site but hardliners have vowed to lay a foundation stone next year regardless. “We don’t care about the courts. A grand temple will be constructed in 2019,” Sushil Chawdhary, a VHP leader, told AFP.