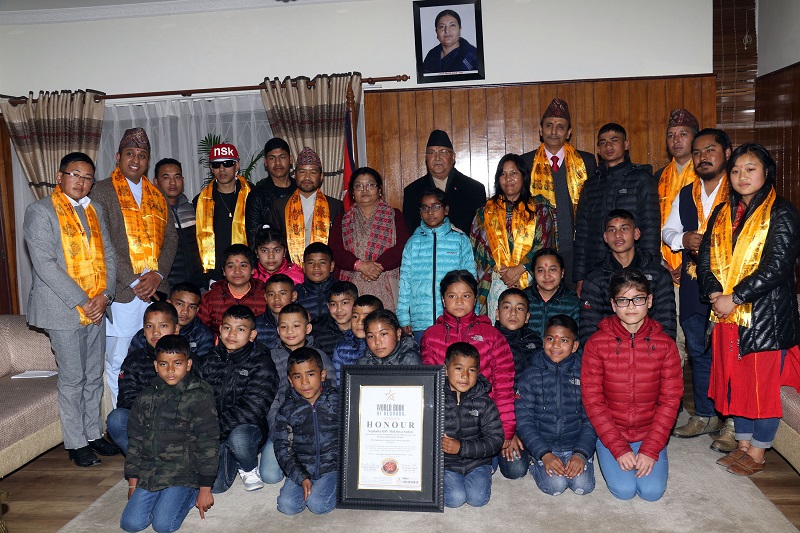 Kathmandu, Feb. 11 The World Books of Records has certified Kirtipur-based Safalta HIV Sikshya Sadan as the Word’s first school with a distinct identity.

The School gives education, food, shelter and clothing to children living with HIV.
At an event organized by the World Book of Records Nepal at the official residence of the Prime Minister in Baluwatar today, Prime Minister KP Sharma Oli handed over the certificate to the School.

As the formal event was inching towards the closure, PM Oli, in a surprising turn of the event, went on to create a musical ambience, urging Soni BK, one of students of the newly certified School, to showcase her musical talents.

PM Oli, in a bid to promote the talent of this little singing prodigy, then had asked the concerned ones in the Office of Prime Minister to arrange recording for her song.

Other equally talented singing talents as Karan Sunar, Himnath Chand and Laxmi Rawal also offered a musical delight at the event at the PM’s request with ‘Kanchi Hey Kanchi’ and ‘Mohani Lagla Hai’.

Furthermore, Swastika Bhandari and Manisha BK, other children with HIV, exhibited their dancing skills on ‘Purba Paschim Rail’ (East West Train) to which the PM quipped, “You guys are riding on the East West Train which I am yet to construct.”

PM’s spouse Radhika Shakya, in the middle of the impromptu musical event, announced that she would like to hand over Rs 100,000 monitory support to the School. “I would like to provide monitory assistance worth Rs 100,000 on behalf of our family.”

Addressing the event after giving away the certificate, PM Oli stated that the state has also decided to support for this cause and praised the deeds of the school adding that fair evaluation of the selfless works was held.

The PM also expressed pleasure for the prize, which was given for selfless service done by being motivated from the humanitarian aspirations.

Though the state has not offered any significant support, its attention was drawn as this is an ‘unusual’ services, the PM praised the service of the Sadan.

On the occasion, founder of Sadan Raj Kumar Pun said that receiving the letter of appreciation was like a dream and said that the school was founded nine years ago for the schooling and take care of students who were rejected by many schools for admission.

Saying that the school was not established in a planned manner, Pun shared his plan to bring 300 such other needy students remaining in Kailali district only.

Likewise, Chairman of World Books of Records Nepal Sagar Katawal said that this school is the first of its kind in the world that has made efforts to spread Nepal’s key regions and heritages across the globe.

Revenue collection up by 22 pts