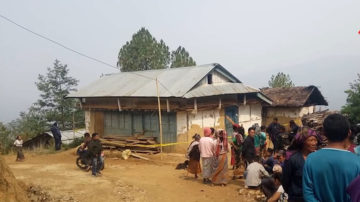 Damak, May 21 . Sita Khajum, 12, who had managed to fee when nine members of two families were murdered in Paanchthar on Monday night, is undergoing treatment here. The incident took place at Arubote in ward no. 3 of Miklagunj rural municipality of the district.

Seeta, who has suffered a broken arm, was admitted to the Lifeline Hospital in Damak, police inspector at the Area Police Office Khagendra Ekten said.

Seeta had told neighbours that a masked person carried out the massacre. Meanwhile, the hospital has restricted visitors considering the mental status of Seeta.