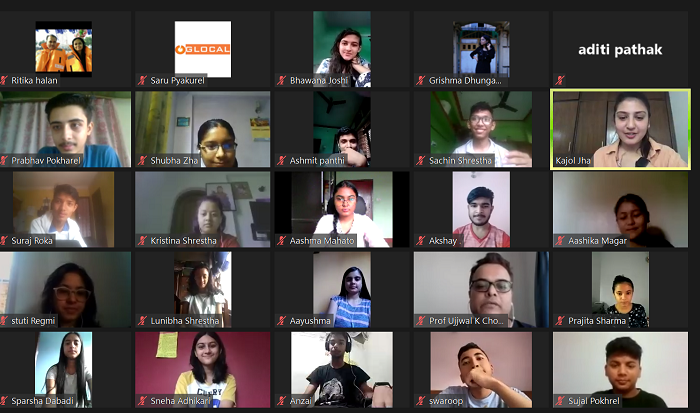 Kathmandu,  August 4 . Online Learning Festival 2020 by Glocal After School was a week-long unique Festival that has ever been hosted for the SEE students in Nepal in association with Kathmandu World School. This program was aimed at integrating all kinds of SEE Students of Nepal under one umbrella which was organized to uplift their enthusiasm, creativity and energy.

The festival began on 29th of July, 2020 where a Career & Motivational Session was organized to engage teenagers which was facilitated by Prof. Ujjwal K. Chowdhury, Vice- Chancellor, Adamas University, India and Mr. Vaibhav Nahata, Motivational Speaker. The next day, they had a Movie Description Session to develop their observational, critical and analytical skills which was delivered by a facilitator from India. There were 3 workshops namely – Teen Empowerment Workshop, Email and Social Media Security and Public Speaking which were delivered by the experts of relevant field.

The most exciting part of the Online Learning Festival were Competitions- Writing and Painting. The topic for writing competition was: ‘Skill Potential in Teenagers’ and we were able to collect many write ups that explored skill ideas in Teenagers. The result was announced on August 2 for writing competition and the victors are Mr. Shubham Yadav, Mr. Biyush Suwal and Ms. Babeeta Kafle as the winners, first runner up and second runner up respectively.

Likewise, the winners of Painting competition are Mr. Mohit Bhattarai, Winner; Ms. Sudipti Shrestha, First-Runner up and Ms. Pema Gurung, Second runner up which was announced on August 3, 2020 where they executed an artistic portray of their School memories. The winners of both the competition received a cash prize of Rs. 10000, Rs. 5000 and Rs. 2000 respectively for Winner, First Runner up and Second runner up along with scholarship for their further studies up to 75%.

KWS Online Learning Festival was comprised of various fun activities, aimed at engaging them in a skillful way. There were more than 200+ participants who participated on different sessions and competitions from different schools. Their participation was incredible and exciting for us as well.

A week long Online Learning Festival ended after the announcement of Winners of competition. It was a wonderful experience to meet the young energetic minds and share our knowledge to enhance their skills. It gives us energy to work for Skill Development and Learnings and the feedbacks after the programs were amazing.