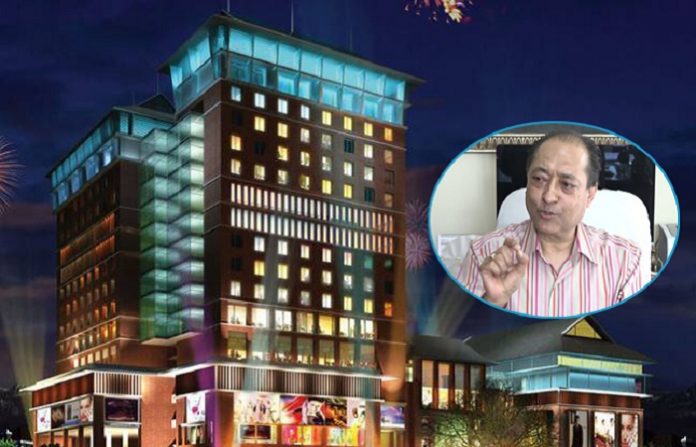 Pioneer Banker Prithiv Bahadur Pande built a lavishing mansion behind the Keiser Mahal in 2070 expending hefty amount. He had purchased the thorny land from Ambika Rana and Shankar Prasad Shah in 2065.  Pandey erected luxurious and fully facilitated mansion in that thorny land which currently known for Chhaya Devi in public.

one had ever obstruct and question on the legality of the property before completion of the building. But, trustee (Guthiyar) filed petition calming their right on the property that was completed with investment more than 5 and half billion rupees. Meanwhile, after knowing the actual facts just one petitioner had evinced dissent accusing others six for abetting the complex instead.

Chhaya Devi complex has been providing service since 20 Posh 2075. The complex has fascinated the surrounding. Subsequently, lots of people approached to courts without confide evidence. The controversy was intentionally created out of an agreement which was already resolved between the then land owner Ambika Rana and Custodian of Singa Sartha Garud Bhagawan Bahal Guthi.

Witnessed by the judge of Kathmandu District Court two sides had reached the agreement on 16 Ashad 2062. The main tenant Rana paid Rs 15 million and 4 anna land and made consensus with the trust (Guthee) that is witnessed by Kathmandu District Court. Before this, there was an agreement between land owner and trustee under the stewardship of judges of Supreme Court duo Prakash Bahadur KC and Bishownath Upadhya.

Nullifying the claim of trustee in the then Mid-Zonal Regional Court an agreement was reached with Kyur Shumsher in 3 Posh 2039. Under the stewardship of Supreme Court on the trustee claim that the land was encroached by Keisar shumsher in Magh 29 1967 and after his father demise a plea was filed to release from his son Kyur Shemshar.

Field book of mapping survey determined, Marshal Keiser Shumsher as tenant and Singha Sartha Guthi as owner of the land of the area of 9 ropani 13 anna 2 paisa 2 daam of land number 1618, and 6 anna of land number 1616, and 2 ropani 10 anna land of land number 1617 in 2033. In 2039 Jestha 21, the land of the part had been transferred to the tenant Kayur Shumsher according Sansthan Act 2033 by Guthi Lagat and Tahashil office Bhadra Kali. Singh Sartha Bahu Garud Bhagun Guthi has already given clean chit to Chhaya Devi complex in 27 Ashoj 2077.

The local residence know the real facts. There is no objection. President of Chhaya Devi Complex, Prithiv Bahadur Pande stated that ‘I have been persistently engaged in conservation and protection of culture and heritage’.

Our family has worked and has been engaged in building temple and conservation of heritage. But, I have now been accused of destruction of heritage. I did not purchase the land of trust (Guthi). I had owned the land after the assurance from the three senor advocate that there would not be any predicament in the registered land. Nobody had objection until the area was covered with thorny bush. It drew the attention after the mansion was built.

Question raised and negative publicity was spread in the legality of land in the multipurpose building of tourism hub Themal despite its commencement. A lot of rumor is surrounding around about the mansion in spite of clean chit on the petition of construction of building in the land of trust from lower court to the Supreme Court. It excoriatingly hurts.

Our family is dedicated to conserve the heritage. Temple of Jwalamai of Assan, Maitidevi and Paty of Sorhakhutte was built up by father (Bhim Bhadur Pande). Our family has expended in Pashupatinath, Kathmandu and Patan Durbar Square. I would have conserve if it was really the heritage site as they are accusing of. He was agonized by the accusation of encroachment of trust of Newar by Pande.

I have land ownership certificate. There was no obstruction from neighbors at the time of construction of building. It was built after Environmental Impact Assessment (EIA). The building was built after passing map. He questioned, ‘Had it been the case as they had mention then how did the map pass?

Court has time and again attested the land as registered one. If the land was governments’, then why the trust (Guthi) did sell?  Why are they persecuting people who has bear such a large amount citing it as Kamal Pokhari watering ritual to father, reacts Chairman Pande.

Local are up against those who are obstructing the business of billion rupees, stated execute of the complex Suman Bikram Pandey. Labors of hotel are up against protest, he added ‘ now the situation has been improving though we were smeared for some time. More than 78% employees in the Chhaya Devi Complex belong to Newari community.

Five Start Hotel in the brand of Aloft has been facilitating world class hospitality bounded in the area of 15 Ropani. 75 deluxe rooms and 14 floor is the main attraction point for tourist in Themel is known for Aloft Hotel. The building is built for business purpose.

Rupee weakens by 5 paise against dollar in early trade