Home top news A Hindu version of the Taliban is asserting itself in India: Anish... 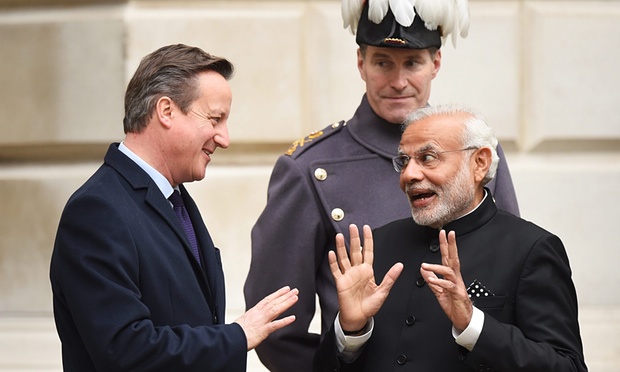 The Hindu god Vishnu has several incarnations, many of them human. The latest of these appears to be Narendra Modi. All over India there are images of the man, right arm raised in the benevolent gesture of good fortune. But this strong-but-enlightened-man image hides the frightening and shrill reality of an increasingly Modi-led Hindu dominance of India.

The country’s openness to social and religious minorities (more than 500 million people) and regional differences is at serious risk. Of late, Modi’s regime has effectively tolerated – if not encouraged – a saffron-clad army of Hindu activists who monitor and violently discipline those suspected of eating beef, disobeying caste rules or betraying the “Hindu nation”.

In the UK, people might perhaps be familiar with India’s cricket prowess, atrocities in Kashmir or the recent horrific rape cases. But beyond that, many of us choose not to know. India’s global image now mimics China’s – a rising global economic power with attractive trade and investment opportunities. As a result, business trumps human rights, with little concern, especially on the part of David Cameron’s government, for the rising wave of Hindu tyranny.

All this is good news for Prime Minister Modi, who flew into London today. He won’t be seriously called to account for human rights abuses or systematic thuggery. If there is one thing that has marked the man’s first year and a half in power it is this: he is not a man who takes kindly to scrutiny or criticism. In fact, he has used the very economic agenda that causes Britain to turn a blind eye to his regime’s human rights abuses to muzzle dissent within India.

Modi’s latest move has been the strangulation of Greenpeace India, culminating last Friday with the organisation’s licence to operate being removed. Respect for human rights and environmental organisations are so often a litmus test for the democratic state of a country. Worryingly, the Indian government has been cracking down on all “foreign-funded” charities for the past year, claiming that the national economy is threatened by environmental restrictions and other “un-Indian” activities. Nine thousand NGOs have been “de-registered” in a concerted effort to force out these “nuisance” groups and cast them as foreign enemies.

Of late, many Indian journalists and human rights activists have been harassed and threatened with “sedition” charges: for example, Teesta Setalvad, who still seeks justice for the victims of communal violence in the state of Gujarat in 2002, when Modi was the state’s chief minister; and Santosh Yadav, arrested in September in the state of Chhattisgarh on what Amnesty International believes are fabricated charges resulting from his investigatory journalism exposing police brutality against Adivasis (indigenous people). A few weeks ago, even a musician who sang a satirical song criticising the chief minister and state government of Tamil Nadu over alcohol sales was charged with “anti-Indian activity”.

This alarming erosion of democracy is a slippery slope that may end up targeting not just minorities and “outsiders” but any dissenting “insiders”. What I’ve seen happening is a spirit of fear taking hold, which threatens to silence activists, artists and intellectuals alike. We’ve never known that before.

Hindu version of the Taliban is asserting itself, in which Indians are being told: “It’s either this view – or else.” A friend told me: “There is huge oppression of anyone who’s different.” Last month, dozens of Indian writers handed back their literacy awards in protest, following communal violence against Muslims and attacks on intellectuals.

India is a country of 1.25 billion people, including 965 million Hindus and 170 million Muslims. We have a long tradition of tolerance and, despite differences, have managed to pull our huge country together. But the government’s militant Hinduism risks marginalising other faiths and tearing apart these bonds. Many of us dread what might then happen.

We in Britain cannot bite our tongues any more; we have a responsibility to speak out. And we need to work on at least two fronts: demand that Cameron not make business deals at the cost of human rights, and press Modi to answer for the Indian government’s abysmal rights record; and recognise and support the many Indian citizens, journalists and organisations that are resisting growing Hindu fanaticism and state authoritarianism.

I’ll be joining protesters outside Downing Street today. Following the lead of India’s opposition groups, we have a duty to speak out for the people Modi is trying to silence, precisely because we are free to do so.

This article was published in ‘the guardian’ on November 13 2015 by a world known Indian Columist/ Sculptor Anish Kapoor settled in UK.

Foreign Minister Gyawali leaving for the US