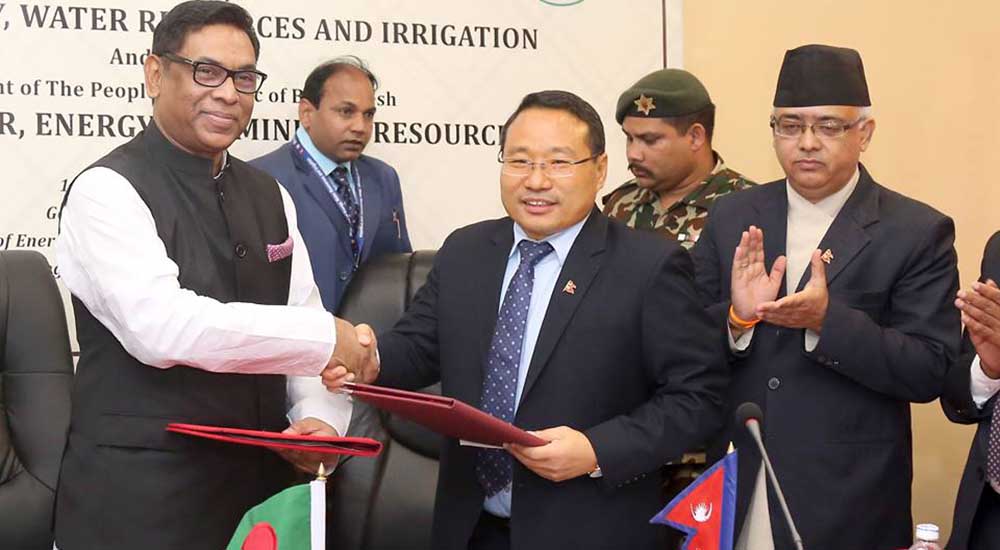 Dhaka, Bangladesh, Sept 8 . Bangladesh is to purchase electricity from the Upper Karnali Hydropower Project of Nepal. The Bangladesh government some days back made a decision to purchase 500 megawatts power from the 900-megawatt project.

Bangladeshi Minister of State for Electricity, Energy and Minerals, Nasrul Hamid, informed Nepal’s Minister for Energy, Water Resources and Irrigation Barshaman Pun that the Bangladesh Cabinet has taken a decision on purchasing power from the Upper Karnali Project.

Minister Pun is currently on a visit to Bangladesh. Minister Pun said at a programme organised by the Embassy of Nepal in Dhaka on Friday that the Bangladeshi State Minister informed him during talks that the two sides – Government of Bangladesh and NTPC, India’s largest power utility– regarding the purchase rate and other technical matters.
It is stated that the project developers Grandhi Mallikarjuna Rao (GMR) Group will sell power to the NTPC, the power corporation of India and NTPC will sell it to Bangladesh.

GMR has not been able to manage the financing for the project as it is unable to secure the market for selling the power generated from the Upper Karnali Project. The second deadline given to GMR by the Investment Board Nepal for this is ending on September 18.

As per the power development agreement reached between the Board and GMR on 19 September 2014, the financing for the project should have been managed within two years from the date of signing the PDA or 19 September 2016.

However, the Board has been extending the deadline due to the Company’s inability to manage the finances of the project. The estimated cost of the project is Rs 150 billion or 1.5 billion US dollars.

Nepal will get 108 (12 per cent) megawatts power and 27 per cent equity from the Upper Karnali Project. The project has been modelled to run in full capacity for only three months of the year. It is being constructed under the build-own-operate and transfer (BOOT) model.

As per the PDA, the project would be handed over to the government after 30 years.
Energy Minister Pun said that Bangladesh planned to buy 9,000 megawatts power from Nepal until 2040 AD.

e added that the two countries are in discussion regarding purchase by Bangladesh of around 1,500 megawatts electricity to be generated from Dudhkosi and Upper Arun hydropower projects of Nepal. The Energy Minister said these talks would also be concluded soon.

At the programme, he also urged the Bangladeshi government and investors to invest in the hydropower development sector in Nepal as political stability has been established in the country.

Technical committees formed
Two committees at the Energy Secretary and Joint Secretary levels have been formed for the implementation of the bilateral collaboration between on energy sector between Nepal and Bangladesh.

Spokesman of the Ministry of Energy, Water Resources and Irrigation, Dinesh Kumar Ghimire, who is accompanying Minister Pun in the visit, said this.

Ghimire said Nepal has proposed the meeting of the two committees for October in Kathmandu and Bangladeshi officials have responded that they would give information on this soon.