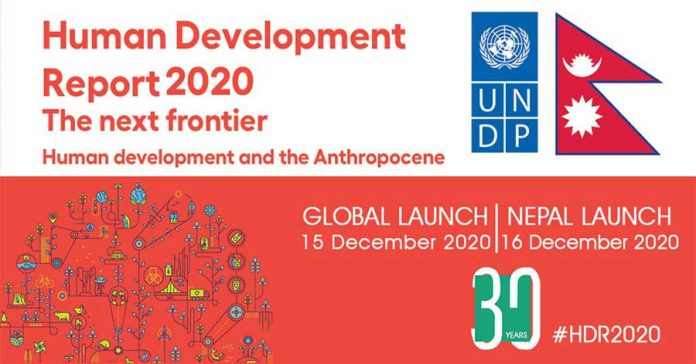 Amid volatile political and economic scenario, ‘Nepal Human Development Report 2020’ assuaged the brunt of Nepal with 1.4 percent rise in the HDI Index relative to 2019. Joint effort of Nepal Planning Commission and UNDP released the Report which earmarked the HDI value of 0.587 for 2020 with 147th.

Nepal elated with the improved index in comparison to the previous year Index of 0.579. It’s a sigh of relief for the fact that it has been marching upwards in the GDI, IHDI simultaneously, which could nudge it further to surpass LDC categories before 2024. This is a milestone to make a headway for SDGs and the long term vision of ‘Prosperous Nepal, Happy Nepali’.

Nepal has been marching to substantiate its dream of establishing public welfare governance system that envisaged to build a civilized and egalitarian society by abolishing all form of discrimination, oppression and injustice and embracing the norms and values of fundamental rights and human rights, gender equality, proportional inclusion, and social justice. In the backdrop of this prospective, the outcome of the HDI reports has its especial meaning to gauge the orientation of Nepal.

In the ensuing process, the indices of the report showed constant rise in the HDI figure. Improvement in it has been attributed to the consecutive growth of per capita income- of US $ 1090 for 2019, US $ 970 for 2018, US $ 860 for 2017- which is one of the three basic criteria to fathom out HDI; with health and education as the others two.

The statistics of the indices suggested the country in the medium human development category in 2018 where it had touch its summit among South Asian already in 2016. To appeared at this stage it has scored (0.647) in urban areas as expected leaving the rural areas far behind to secure only (0.561). High per capita income and better access to education and health services in the urban areas has been explained as the outcome of such striking disparities. Similarly, from 1990 to 2018, there is imperative stride jumping 53 percent in the HDI.

IHDI value of 0.439 which is discounted from the HDI of 0.587 has overall loss of 25.2% in this year. Highest loss stems from income inequality because Nepal scored fairly well in education and health. In the IHDI index, Urban residents experienced highest inequality than rural. In this, highest inequality is noted in Karnali Province followed by hills. However, human development loss due to inequality improve to 25% in 2018 from 34% in 2012.

33.5 percent of parliamentary seats are upheld by women as has been entitled by Constitution however the rest are covered by men. In the similar kind of statistics, 12 percent of women ages 25 and older have reached at least at a secondary level of education as against 43.1 percent of their male counterparts. Gender inequality is more pronounced in the mountains with the GII value 0.557, where Karnali Province faces highest level of gender inequality in the sharp contrast to Bagmati Province that has maintained the lower.

The report quoted (MICS & NDHS data) that from 2006 to 2014, the Muilti-dimensional Poverty Incidence (headcount) fell more than halved from 59.2 percent to 28.6 percent. Karnali Provice (57 percent) being stuck in extreme education and nutrition facilities suffered from highest form of multidimensional poverty and Bagmati with (12.2) upheld its lower index history.

Among all the provinces, Bagmati topped on all composite indices meanwhile Karnali province and Province 2 stumbling with underperformance consistently.

Though Nepal has now been eligible to enlist as LDC; having fulfilled two criteria – human assets and economic vulnerability- out of the three criteria- the host country decided to do so only after 2024. As the report suggested that it entails huge implications on specific international supportive measures that operates across the spectrum of foreign assistances, export competitiveness, industrial production and jobs unless compensatory measures are in place.

Pandemic has disrupted education of 9 million students. This could severely undermine the development of human capability.

Disruption in health sector have been assumed to be severely affecting its regular dispensation of the services in the previous level and its challenging task to resume it.

Similarly, redundancy in informal sector will hit earning of the public and specifically women would be bearing it which might reinforce the gender inequality.

So, aftermath of the pandemic will have dire consequences in income and non-income poverty if policies are not formulated pragmatically and urgently.

Relationship between Bangladesh’s Zero-Tolerance for terrorism and Northeast India’s peace and...