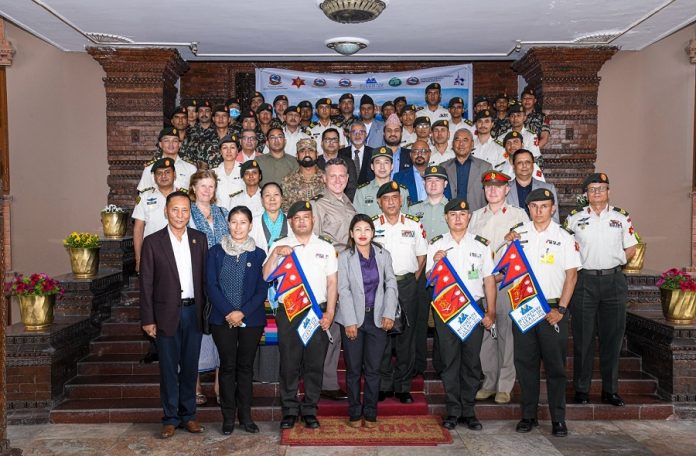 Kathmandu  April 10. The Coca-Cola Foundation has joined hands with Mountain Clean – Up Campaign 2022 led by theNepal Army and Rotary Club of Nagarjunfor its 3rd edition with the theme “ An endeavor to save the Himalayas; Our Mountains, Our Responsibility”.The Coca-Cola Foundation is the major Corporate Partner among multiple stakeholdersfor this year’s campaign.

The campaign is one of the largest mountain clean-ups in the worldwith an aim to protect and preserve sanctity of the Himalayas by retrieving waste that has been left behind by visitors and cumulated on the mountains over the years. Along with multiple stakeholders, the campaign that began on April 5 until June 5 this yearwill be cleaning 4 mountains of Nepal that are above 8,000 meters which includes Mt. Everest, Mt. Lhotse, Mt. Manaslu, and Mt. Kanchenjunga.Approximately 35,000 Kgs of waste has been estimated to be collected which will be handed over to the recycling partner for proper waste management.The journey to the mountains is strenuous due to harsh weather conditions and climbing at high altitudes for which the team has been training dedicatedly for the past months to prepare for the expedition.

The Campaign Director of Mountain Clean-Up Campaign 2022 stated, “The Himalayas are our national pride and as the theme for Mountain Clean-Up Campaign 2022 goes “Our Mountains, Our Responsibility”, it is our duty to keep it clean and preserve it for the local communities and our future generations. In addition to this, we are also working with the local communities and partners to raise awareness about the concern of waste management in the mountains. We are thankful to all the stakeholders involved, for their generous support, including The Coca-Cola Foundation for their continuedcommitment towards the mountain clean-up campaign in Nepal.”

Coca-Cola has also provided its diverse portfolio of beverages to refresh the expedition team, volunteers and officials.

Saadia Madsbjerg, President of The Coca-Cola Foundation, stated, “The efforts made by Nepal Army to clean up the Himalayan peaks and bring together like-minded partners is exemplary. We are honored to actively supportthe Nepal Army in their effort for the third year to keep the pride of Nepal pristine. The foundation remains committed to community recycling projects. We are confident about the success of the cleanup andwish the expedition team the very best.”

In 2019, the first Mountain clean-up Campaign led by the Nepal Army was successfully carried out along with involvement of a diverse set of stakeholders, where 10,586 Kgs of waste were collected. Continuing the efforts, the second edition of the campaign took place in 2021 where 27,671 Kgs of waste were retrieved from six mountains. The waste collected from the mountains includes items like Oxygen Canisters, Tents, Food containers, Plastics and Electronic waste etc.

Saif Ali Khan Advises Sister Soha Not To Marry Before 40