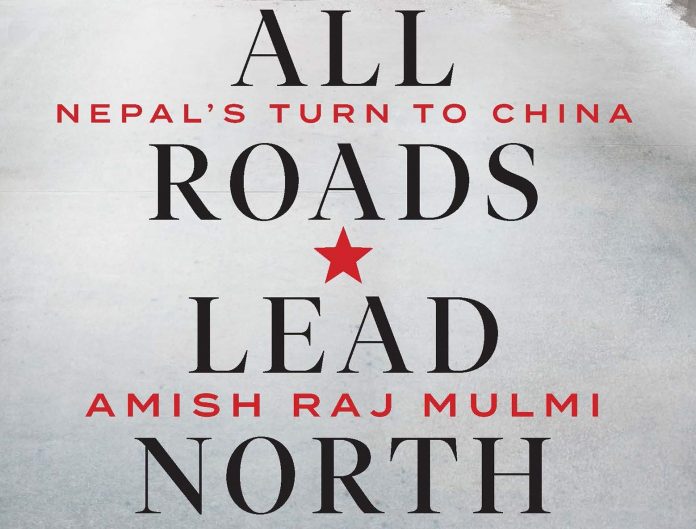 All Roads Lead North, a comprehensive account of trade stories of Nepal, Tibet and China in the 18th century clearly disseminates the information from writer’s critical knowledge on the topic. The aim of this book is twofold, first—it puts an effort to trace Nepal’s nexus with China, particularly Tibet with trade as its roots. Second, this book questions the prevalent notion in symbolizing China as North, and the reason for Nepal taking a turn towards the same in its developmental process.  Further, the book argues on the strategic rivalry that India and China continue to maintain with their adjoining Nepal’s frontiers.  The book enables a wider perspective of Chinese involvement in Nepal’s developmental process while realistically helping them in developing their own insights in understanding Nepal’s foreign relation with its neighbors.

Author Amish Mulmi probes on some greater perceptions to emphasize upon the Nepal-China relationship through travelogues that covers perilous journeys into the Himalayas. The book has been successful in creating thrilling personas of the sceneries. Also are some narratives by Newari Buddhists traders from Nepal who opt to perform business activities in Tibet back then as a stronghold account to realistically deliver the bigger picture of the time. Mulmi’s deepen eloquence, All Roads Lead North, puts forth an advanced perspective in understanding Nepal-China relations in this global era.

The first section of the book narrates incidents of Nepali traders in Tibet during 18th century. Also in-depth analysis upon the war between China and Nepal has been well discussed. The author has been successful in bringing life stories of Tibetan guerrilla fighters, the experience of people living as border citizens and the nexus of trans-Himalayan traders of Nepal-Tibet and China. With his greater effort in tracing history hundred years back Mulmi excels his writing with splendid anecdotal outlook, making it an easy for the beginners who want to excel in geopolitics.

The book has been an eye opener in looking at the future with different perspectives, as to analyze the growing involvement of China in Nepal and generalizes Indian view regarding the same. It analyzes how China employs instruments of diplomacy, economy, political, and military outreach in maintaining greater influence in border sharing countries like Nepal. The last three chapters in the book are encapsulated in analyzing the underlying issues that shape the potent interplay between Nepal’s domestic polity and its geopolitical influences.

Tuning towards the north hasn’t been that easy for Nepal, and of course it wasn’t done overnight either. These facts are critically analyzed in the backdrop of the blockade imposed by India when the country was reeling from the post 2015 earthquake crisis that killed nearly 10,000 people and was on the height of humanitarian crisis. The blockade added fuel to the fire when Nepal was crippling with severe socio-economic challenges along with the aftermath of devastating natural disaster.

All the essential supplies including food, medicines and petroleum got halted at the border. The then prime minister KP Sharma Oli mulled over some bold strategies in destabilizing Nepal’s over dependence on India and looked towards the north for better trade and relations. All these facts are decisively scrutinized highlighting the murkier picture of Indo-Nepal relations, making it a comprehensive read, even for novices in foreign affairs.

The over reliance on India from basic to luxurious now seems to be changing with China’s presence in South Asia. As a matter of fact, Nepal has long wanted stronger ties with China, to counteract India’s oppressive intimacy and its lopsided foreign policy. Moving on the book, it undertakes a focused assessment of the changes that have taken place in Nepal with increased involvement of China.

Mulmi has used various data, facts, and has banked on well researched contents in depicting Nepal’s involvement with north in many infrastructural projects, and also suggesting that this trend would heightened since the geopolitics in the region seems fragile with China’s aggression in maintain dominance not limiting Asia, but the whole world.