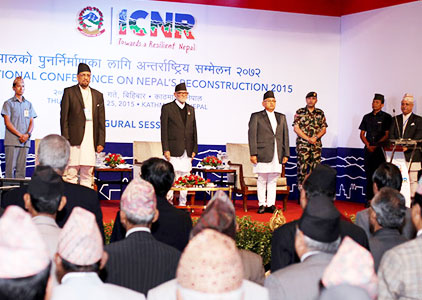 Kathmandu, June-25 The much-awaited International Conference for Nepal’s Reconstruction will begin here on Thursday and delegates from several countries are expected to identify areas to lend support and make commitments for much-needed financial assistance for the country, which is trying to make early recovery from the earthquakes of April and May.

The country suffered damage and losses worth Rs 706 billion during the quakes.

Although the private sector sustained about 3.3 times the value of damage and losses suffered by the public sector, the government is expected to end up covering a huge portion of the costs required for rehabilitation and reconstruction, as it is preparing to introduce several packages for early recovery.

“According to preliminary estimates, the government will have to bear almost 60 per cent of the total recovery needs, with the rest of the funding liabilities resting on the shoulders of the private sector, communities and individuals,” National Planning Commission Member Swarnim Wagle told The Himalayan Times.

This implies the government will have to mobilise around Rs 402 billion for rehabilitation and reconstruction, considering total disaster funding needs of Rs 669 billion as estimated by the report on Post Disaster Needs Assessment prepared by the NPC.

“But again this is a preliminary estimate and the figure may have to be revised upwards as the government makes various policy announcements to prop up different sectors of the economy,” Wagle said.

This means the nation will require substantial external assistance, as the government cannot mobilise all the financial resources on its own due to ‘slowdown in revenue growth as a result of disrupted business activities’ in the post-quake scenario.

This message is expected to set the tone for the conference being held with a theme, ‘Towards a Resilient Nepal’.

The NPC will then present the PDNA report, which will provide a snapshot of damage and losses suffered by various sectors due to quakes, and recovery and reconstruction needs of the country.

Following this, delegates from several countries and agencies will deliver speeches and make pledges for financial assistance.

As of this afternoon, 278 delegates from 54 countries and agencies had confirmed participation for the conference.

Also, presidents of the ADB and JICA, vice president of the World Bank, development commissioner of the European Union and under general secretary of the United Nations have agreed to join the conference.

No more Plastic bags inside Valley