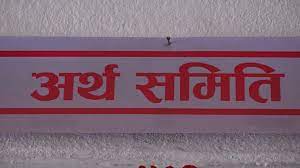 Kathmandu, July 6. The Finance Committee of the House of Representatives (HoR) has directed the Nepal Rastra Bank to lay emphasis on the implementation of relief, subsidy and economic recovery programme by revitalizing the pandemic-battered economy through the monetary policy of the current fiscal year.

Committee President Krishna Prasad Dahal informed that the committee issued 17-point directive including promotion of key dynamic areas of economy and attaining the goal of rapid growth. The committee directed the central bank to deposit the stipulated amount in the business regularization fund that was instituted to compensate the workers of small, cottage and big industries, tourism, private educational institution, transportation, film industry and media workers, and support the resumption of businesses and bring it to effective operations.
President Dahal further shared that the Committee instructed the central bank to expand business area and amount ceiling as the NRB’s subsidized interest rates of 5 percent has positively impacted the COVID-19-affected enterprises. The Committee asked the central bank to widen the scope and limit of subsidy loan to be provided to the micro, small and medium-scale industry and commercial farming, youth, enterprises and returnees from foreign employment.
Committee’s Secretary Dr Surendra Aryal said that the committee also directed the NRB to make effective the programme to provide loan up to Rs 2.5 million at one percent interest rate to motivate youth entrepreneurs in start-up business. The Committee also asked the NRB to focus the monetary policy in mobilizing resource for economic growth, promotion of domestic entrepreneurship and export, replacement of import and production-oriented sector. It instructed to make policy-level arrangements being aware of maintaining financial stability.
The Committee suggested the national bank to make policy arrangement to check deficit foreign reserve to discourage import of unnecessary luxury items. Similarly, the NRB has been asked to place policy arrangements to encourage merger of banks and financial institutions based on the necessity, capacity and competition. Attention was drawn to make transparent various service charges provided by banks and financial institutions as the countries that have adopted good practice. Likewise, the Committee also directed to restructure and reschedule the loan given to different enterprises in the current fiscal year by analyzing COVID-19 impact analysis of on the economy.
It is stressed that the monetary policy should maintain broader economic stability, ensure sustainable development through rapid growth of economy, promoting access to finance sector, stability of the financial sector and development of safe, healthy and efficient payment system. The commercial and development banks are asked to immediately implement the provision of ensuring subsidized loans from their branches and to create employment through the subsidized loan scheme.
Similarly, it is suggested that the new monetary policy should include the points for mandatory provisions for the banks to make their investment in the areas identified by the budget. Likewise, the Committee has asked the central bank to implement the refinancing scheme by making procedures so that a large number of small enterprises could get benefit out of it. Furthermore, the Committee stated that the government institutions should be made result-oriented and run economically through austerity measures in the unproductive sectors in the present context of COVID-19.