Kathmandu, April 22 .  Former Deputy Inspector General of Police Govinda Niroula has been arrested in relation to the ongoing investigation over the smuggling of 33 kilograms of gold from the Tribhuvan International Airport.

Ex-DIG Niroula was arrested by the investigation team formed by the Home Ministry to probe into the scam. The team is led by Joint Secretary at the Ministry Iswar Raj Poudel.
Niroula was the head of Nepal Police in the Airport when the yellow metal was smuggled via it.

He was taken for necessary investigation into the case, the Home Ministry has said. Ex-DIP Niroula had retired from service recently on April 12. The gold smuggling took place in early February this year. 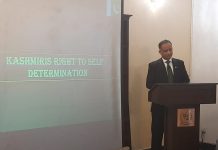