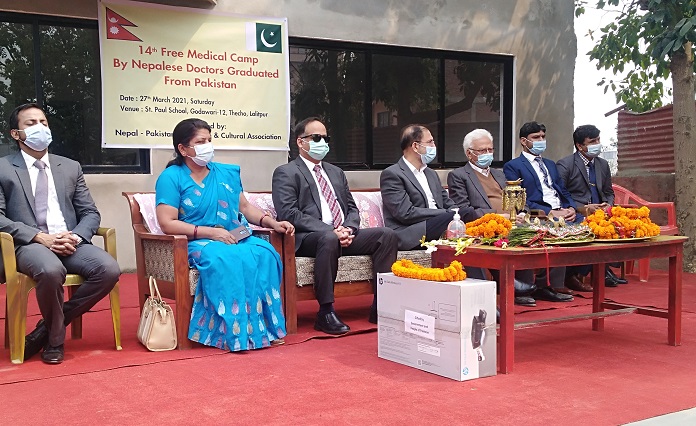 During the inauguration ceremony, Ambassador Shah handed over a gift of computer equipment to the Deputy Mayor of Godawari Municipality for St. Paul’s School.

In the Free Medical Camp, Nepalese doctors and para-medical staff (who had graduated from various medical intuitions of Pakistan) provided free medical advice, treatment and three months medicines to more than 500 men, women and children. Patients were apprised about preventive measures against COVID-19 and they were provided with free face masks & hand sanitizers.

In his remarks, Deputy Mayor of Godawari Municipality, Ms. Mona Adhikari thanked the Embassy of Pakistan and NPFCA for organizing free medical camp in Godawari Municipality and provision of free medical facilities to the deserving people. She praised Government of Pakistan and NPFCA for generously helping humanity. She also thanked the Embassy for donating computer equipment to the School.

In his remarks, Ambassador Shah said that the Free Medical Camp is a reflection of people-to-people relations between Pakistan and Nepal. He thanked NPFCA, doctors and para-medical staff for upholding the spirit of serving humanity. Ambassador Shah also assured of Pakistan’s continued support for such medical camps in future as well.

Stranded Nepali workers to be taken back to work