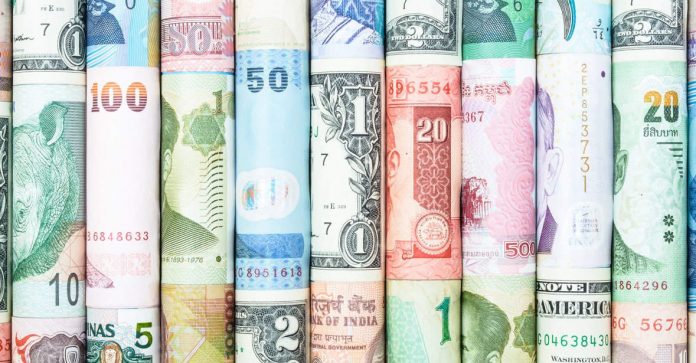 The currency market has been surveyed every three years since 1986 and over an counter (OTC) derivatives market activity since 1995. The last data available is of the 2019 Triennial Survey which involved central banks and other authorities in 53 jurisdictions which collected data from 1300 banks and other dealers. As per the data, Foreign Exchange (FX) markets reached $6.6 trillion per day in April 2019 up from $5.1 trillion three years earlier. The USD retained its dominance with 88% of all trades followed by Euro 33% and JPY 17%. On emerging market shares, the largest being the Renminbi (RMB) that remained on status quo at eighth position in global share with 4.3% ranking just after Swiss Franc.

To analyze this super dominance of USD in world market with current discussion on receding power of US against the oncoming dominance of China; we need to look back at the fall of classical gold standard in which every currency was backed by the gold reserve of the country.

Towards the end of classical gold standard, as the supply of gold continued to fall behind the growth of the global economy, the GBP and USD started fulfilling that gap. Smaller countries began holding more of these currencies instead of gold. The result was an accentuated consolidation of gold into the hands of a few large nations. In 1931, England suspended the gold standard while in 1934, US revalued the Gold from $20.67 per ounce to $35 per ounce allowing other nations to convert their gold into more USD. This higher price for gold increased the conversion of gold into USD, effectively allowing the US to corner the global gold market.

By the end of World War II, the leading western powers developed a framework for the global currency market called Bretton Woods system which effectively meant – all nations currencies valued against USD and guaranteed to redeem its currency for USD instead of Gold, whereas USD was convertible to Gold at $35 per ounce. Global Financial System continued to operate on Gold standard – albeit indirectly. By this time, the US held three-fourth of world’s supply of Gold and was the only currency still backed directly by gold – hence the dominance of USD started.

This continued for three decades, however; as the world rebuilt itself after WWII, the US saw its gold reserves steadily drop as money flowed to war-torn nations and due its own high demand for imports. The high inflationary environment of the late 1960s sucked out the last bit of air from the gold standard. As official dollar liabilities held abroad mounted with successive deficits, the likelihood increased that these dollars would be converted into gold and that the US monetary gold stock would eventually reach a point low enough to trigger a run. Indeed, by 1959, the US monetary gold stock equaled total external dollar liabilities, and the rest of the world’s monetary gold stock exceeded that of the US. By 1964, official dollar liabilities held by foreign monetary authorities exceeded that of the US monetary gold stock.
The increasing competitiveness of foreign nations combined with the monetization of debt to pay for social programs and the Vietnam War soon began to weigh on America’s balance of payments. Member nations were reluctant to cooperate fully in maintaining the market price at the US price of gold. In the following years, both Belgium and the Netherlands cashed in dollars for gold, with Germany and France expressing similar intentions. In August of 1971, Britain requested to be paid in gold, forcing US President Richard Nixon to officially close the gold window. By 1976, it was official; the dollar would no longer be defined by gold, thus marking the end of any semblance of a gold standard.

Though a lesser form of the gold standard continued until 1971, its death had started centuries before with the introduction of paper money—a more flexible instrument for our complex financial world. Today, the price of gold is determined by the demand for the metal, and although it is no longer used as a standard, it still serves an important function. Gold is a major financial asset for countries and central banks; while USD continued its global dominance in international trade despite not backed by the Gold.

In January 1st 1999, a unique experiment in human history – Euro (€); the single currency shared ultimately by nineteen European nations was created. Never before has a group of countries created a brand-new currency that they would share with one another. Had it been successful, it had all the potential to change the game of currencies thus far in the history. However, the Euro is merely surviving skillfully as it is muddling through challenges it confronts be it Brexit, the migration crisis or a militarily assertive Russia owing to which EU can’t speak with one voice on foreign policy and defense issues. Its institutions and decision-making procedures perplex the public and seem permanently in need of reform. The EU therefore, lacks both a democratic mandate and a vision of the future. It is, in fact, administratively paralyzed, and facing either sudden or prolonged internal collapse.

Fast forward to 2008, as the global financial crisis hits the global economy post Lehman Brothers’ collapse; world finds China as the third largest economy by GDP with clear projection of becoming second largest GDP by 2010. As the impact of financial crisis unfolds, China suddenly finds itself with foreign exchange reserves worth US$1.95 trillion, of which a large part was denominated in USD, especially US treasury bonds and agency bonds. According to the preliminary report on foreign portfolio holdings of US securities at the end of June 2008, China held US$535 billion in US treasury bonds, US$544 billion in US agency bonds, US$27 billion in US corporate bonds and US$100 billion in US equities. The threat of potential devaluation and downgrade of its US exposure resulting from the deepening of the subprime crisis that may erode the international purchasing power of China’s foreign exchange reserves gave birth to RMB internationalization.

In 2009, China established the Dim Sum Bond market and expanded cross-border trade RMB settlement pilot project to establish pool of offshore RMB liquidity. As a result, by 2015, RMB became the second most used currency for trade and services. RMB entered into next stage of internationalization by introducing Shanghai-Hong Kong stock connect and Shenzen and Hong Kong exchanges. Since, 2009 China has signed currency swap agreements with various countries. In November 2010, China and Russia began trading in their own currencies, abandoning the USD as the medium of exchange in bilateral trade. This was soon followed by Japan and also the direct trading of RMB and Thai Bhat was launched in Interbank FX trading system. In 2013, the UK became the first G-7 country to set up an official currency swap line with China. In 2016, RMB got included in Special Drawing Right (SDR) basket created by International Monetary Fund (IMF) with weightage of 10.92% which is higher weightage than JPY and GBP which were already in the basket since long.

Even with these major developments, RMB internalization is far from complete as the report on the Internationalization of RMB in 2020 released by PBoC highlighted that in the first quarter of 2020, the share of RMB in global foreign exchange reserves rose to 2.02%, a record high.

One of the major prerequisite for established reserve currency status is to have deep, open and well-regulated capital markets so the currency can be used to finance trade as well as provide a large enough market in securities for investors. One area, where the progress has been deliberately slow is opening up of China’s onshore capital market. RMB, to be truly global and become a more widely held reserve currency, there needs to be greater access for foreign investors to local capital markets, even deeper global RMB liquidity and wider cross-border flow channels to achieve the major investment currency status. Above anything else, to achieve the trust of global market participants for establishing RMB as a reserve currency, China ultimately requires to remove capital control and establish transparent foreign exchange rate purely driven by demand and supply of the currency which seems fairly away.

Hence, for the foreseeable future USD continues to dominate the world trade, basically due to reasons like, strong official and institutional support formalized earlier through Bretton Woods system and now with infrastructure and monetary framework of world financial market driven by establishment of Basel Accords, IMF and World Bank. Valuation of almost all the globally trading commodities from Agri, livestock, energy, forest product, metals, precious to others are all in USD. While there is valid argument that under the leadership of US, world economy by and large remained stable and functioning with medium common rule, there can be counter arguments that it ultimately ensured that US will rule the world trade along with its associate nations.

It will be unfair to conclude without touching what is ahead in global currency game and obvious is cryptocurrency. Interestingly it coincides with RMB internationalization in 2008 when a genius pseudo Satoshi Nakamoto introduced the concept of computerized, decentralized and distributed ledger named Blockchain technology. This gave birth to estimated more than ten thousand cryptocurrencies operating today with over 300 million crypto users worldwide and over eighteen thousand business already accepting cryptocurrencies payments. El Salvador being the first country using it as a legal tender. The total market capitalization is believed to be more than 2 trillion USD.

Central Bank around the world is trying to defend it by introducing the Central Bank Digital Currency(CBDC), however it misses the basic fundamental element of Cryptocurrency which is freedom; freedom from control of monetary policies and authorities with price and volume determined by pure demand and supply without any interventions by the so called monetary authorities.

In these advanced game of currencies, it is pity that NPR has been pegged to INR since its birth and while Nepal is independent nation its currency is not and neither its monetary policy has control over the primary objective of price stability as all of the policy instruments are defunct in absence of control over its exchange rate. (Bajgain is the Deputy General Manager of Nabil Bank)

As per the financial tool, Lets see which are the best...