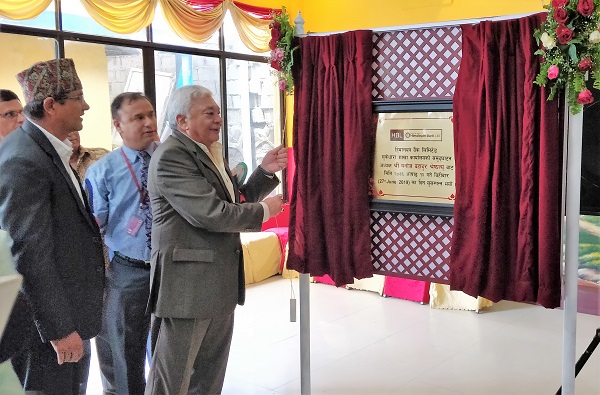 Addressing the function Chairman, Mr. Shrestha, underlined that the Bank will facilitate the local residents to enlarge their productive sector businesses by meeting their financial needs apart from providing modern banking facilities. Amid the function, he stressed that Himalayan Bank is one of the most trusted, reliable and secured bank of the country. He further added that the Bank shall be coordinating with various sectors in the path to prosperity of the entire Metropolitan City.

Similarly, he emphasized that the progress of the entire metropolitan city relies on the promotion of small and medium sized business houses and for that Himalayan Bank is committed to invest in potential productive sector. He further added that Himalayan Bank is always there to help the entrepreneur involved in productive sector. Thus the bank will be focusing its activities on productive sectors starting with lending activities to small and medium entrepreneurs under the ‘Small and Medium Enterprises Loan’ and urged the resident for their active involvement.

Mr. Shrestha further, highlighted the recent financial position of the Bank. According to which deposit base of the Bank has reached to the size of Rs. 112.27 billion and loan portfolio is over Rs. 98.53 billion and has been able to generate Operating Profit of Rs. 2.87 billion up to the third quarter end of current fiscal year.

Besides, Board of Directors, Chief Executive Officer including Senior Executives of the Bank, Local dignitaries, reputed entrepreneurs and Journalists from various media houses were also present at the inauguration function.

Rupee up 2 paise against dollar