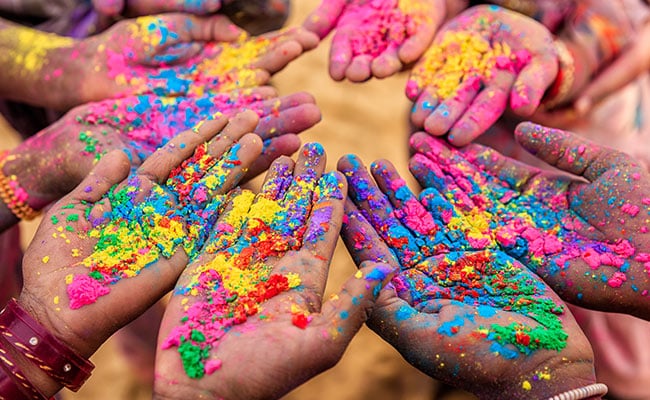 Kathmandu, March 28. On the day of Phagun Shukla Purnima, the festival of Holi is being celebrated in the Himalayan and hilly districts of Nepal today.

With the advent of spring, the Phagu festival, which brings a message of mutual harmony and harmony, is traditionally celebrated today with a variety of colors and Lola games. This festival, which was celebrated in the Valley a few years ago, has become more civilized lately due to the activism of the police.

The process of painting and painting Lola against the will of the pedestrians is being stopped. Even on the eve of Phagu festival, dirty water is not seen in the streets of the capital. As last year, Corona’s influence is growing globally, the administration has called for a ban on the use of water and paint during the Phagu festival. The administration has also requested the family to celebrate Phagu Purni.

Especially, the girl was filled with water in Lola and sprayed for a week before, creating an environment where she could not go out psychologically. Savita Ghimire, who came from Godavari in Lalitpur district to work in the private sector, said that she was able to walk easily even on the day before the Phagu festival this year.

On the occasion of this festival, the people present in Basantapur of Kathmandu today make the atmosphere colorful and burn the cracks buried there in Tundikhel with shield bajagaja. The ashes of the incision are vaccinated with the belief that it will be used for medicinal purposes.

On the day of Phagun Shukla Ashtami, in front of the Gaddi meeting at Basantapur, the phagu begins after worshiping the dirt tree adorned with colorful flags. Tonight in Tundikhel, a monster named ‘Gurumapa’ is fed ten pathis of rice brought from Itumbahal and a calf’s meat in a stream called ‘Jadhu’ inside the military hospital.

In the Treta era, when Daityaraja Hiranyakashyapu forced his sister Holika, who had the gift of not being touched by fire from Brahma, to enter the blazing fire with Prahlad with the intention of killing his son Prahlad, the devotee was burnt to ashes.

It is believed that the tradition of playing Holi 9fagu on the occasion of Holika, which has become a symbol of sinful tendency to abuse power, has been going on since that time.

Similarly, in the Dvaparayuga, the demon Putna, who was sent by Kansha to kill Lord Krishna, failed to suck his poisoned breast. Prada Ram Chandra Gautam, a theologian and chairman of the Nepal Panchang Judging Committee, informed the RSS that the people of Vraja have a tradition of celebrating the Phagu festival.

Since well-prepared dyes and abir cures skin diseases, playing with such dyes destroys the phlegm produced in the body in winter. This festival also has Ayurvedic significance as the smoke from the burnt rip eliminates the germs of many winter diseases.

The government has traditionally been giving public leave on the occasion of Phagu festival. In the Terai region, this festival is celebrated on the day after the full moon. This year too, Holi is being celebrated on Monday in the Terai.

On the occasion of this festival, the use of drugs such as marijuana, cannabis, alcohol and other forms of hooliganism, use of chemicals that adversely affect the body and hitting Lola in vehicles is also decreasing.

On this day, groups of men and women enjoy dancing in the area from morning to evening, eating food mixed with cannabis, dancing in various colors.

In this festival, the tired people get dressed in colorful costumes and compete with their families. In this festival which lasts for seven days, every day brothers and relatives gather and enjoy sweet food.

In this festival called ‘Hobo’ in the United States, people wear different types of humorous costumes and organize competitions and give prizes to the winners.

Even though it is celebrated under different names, the tradition of playing fagu is found in many countries. This festival is celebrated with the main objective of promoting mutual harmony and social unity.

Foreign Employment should be safe and decent