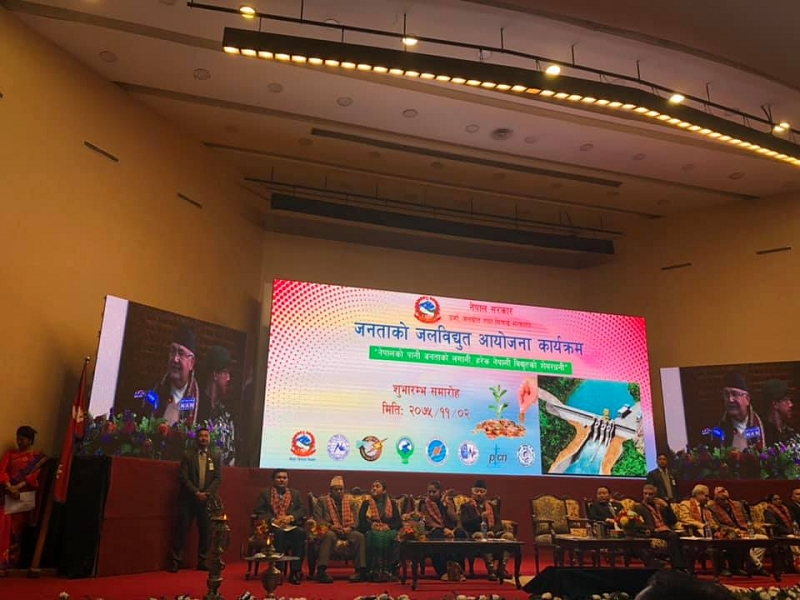 Kathmandu, Feb 14 .  Prime Minister KP Sharma Oli has announced that he would purchase the Initial Public Offering (IPO) of the hydropower project to be built in people’s money.
At the programme ‘Nepal ko Pani Janata ko Lagani, Harek Nepali Bidyutko Share Dhani’ (Water of Nepal for People of Nepal, Each Nepali a Shareholder of Hydropower) launched by the Ministry of Energy, Water Resources and Irrigation from today, KP Oli expressed his intent.
PM Oli, however, did not delve into details how many IPO shares he would like to buy but he said he will urge all Nepali to participate in the programme which aims to tap the water resources of our country for constructing hydropower.

PM Oli pledged to accomplish the government’s campaign of ‘Prosperous Nepal: Happy Nepali’ by capitalizing on whatsoever amount of the public’s idle fund and investing on the development of hydropower projects in the country.

PM Oli reaffirmed, “We will continue to work on the projects that people deem impossible.”
Pressing for prudent mobilization and management of the internal resources to achieve prosperity in the country, PM Oli shared that the lacking fund for the hydro power projects will be arranged by donor agencies.

He also said that the incumbent government was active in mobilizing idle savings or fund in the active sectors like hydropower.

According to him, although Nepal was the first country to generate electricity in the South Asia, it could not make strides in the hydropower sector owing to the archaic policy and programmes.
Prime Minister Oli shared that the government was achieving the speed day by day. He also shared that the government on Wednesday had launched a programme aimed eradicating the burning issue of unemployment in the country.

PM Oli also expected the cooperation from one and all to materialize the prosperous campaign as about 40 per cent population is of youth and 60 percent of active population in the country.

On another note, PM Oli also the chair of ruling Nepal Communist Party (NCP) said that he and another chair Pushpa Kamal Dahal ‘Prachanda’ were not united in a single party (NCP) by chance where as they united realizing a need of the nation for change and development.

Aircraft makes emergency landing after being hit by bird