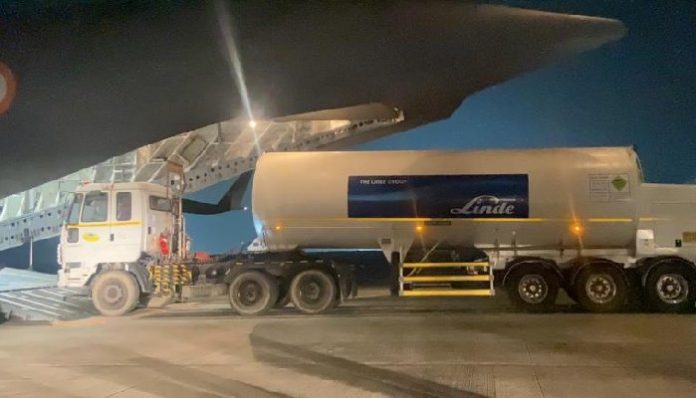 New Dilli, April 28.To address the shortage of oxygen tankers in the country, the union government has imported 20 cryogenic tankers of 10 MT and 20 MT capacity and allocated them to the states. Madhya Pradesh, Uttar Pradesh, Delhi and Gujarat will get two 20 MT cryogenic tankers each. Uttar Pradesh (three), Rajasthan (four), Delhi (three) and Gujarat (two) will get 10 MT cryogenic tankers.“The mapping of liquid medical oxygen (LMO) from the manufacturing plant to different States being a dynamic process and transportation of medical oxygen through cryogenic tankers becoming a bottleneck in making available LMO from the eastern part of the country to other parts, twenty cryogenic ISO containers of capacity 20 MT and 10 MT have been imported to augment the transportation of Oxygen,” the Union Health Ministry said in a statement.The Ministry of Road Transport and Highways (MoRTH) in consultation with Department for Promotion of Industry and Internal Trade (DPIIT) under the overall guidance of the Empowered Group-II (EG-II) have mapped the allocation of these containers to suppliers of Uttar Pradesh and Madhya Pradesh, Rajasthan, Delhi and Gujarat.India is struggling with a second wave of coronavirus infection and hospitals in several states are reeling under shortage of medical oxygen and beds in view of rising Covid-19 cases. In this situation, Prime Minister Narendra Modi has held several review meetings with states with shortage of oxygen.

Last week, he also held a virtual meeting with oxygen manufacturers in the country and promised full support of the government. The Prime Minister has said keeping in mind the requirements of states pertaining to oxygen, the government is working on effective use of railways and Air Force so that the tankers reach the production centre as soon as possible.

Investment of ADB in Nepal on suspect