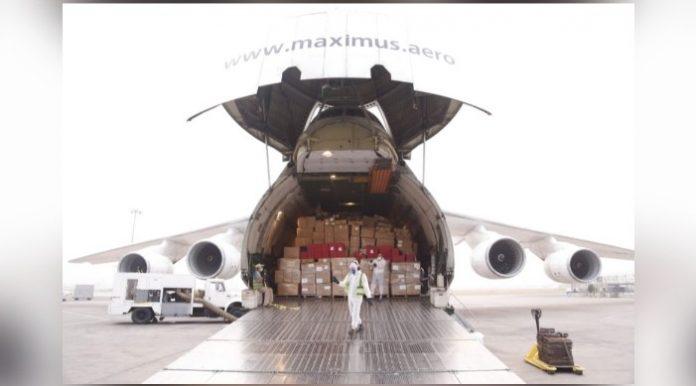 Agencies, April 30. On Thursday, a special cargo plane carrying 157 ventilators, 480 BiPAPs and other medical supplies arrived from the UAE to India. This was the second tranche of supplies from the Gulf country.

On Tuesday, IAF C-17 airlifted 18 Cryogenic oxygen containers from Dubai airport and landed at Panagarh air base in three sorties.

The UAE has come forward with its timely supplies of medical relief material to India, which is battling the second wave of coronavirus wreaking havoc with 3,79,257 new infections and 3,645 deaths in 24 hours

On the same day, by lightening up its iconic buildings, including Burj Khalifa, the world’s tallest building in tricolor, the UAE conveyed its message of solidarity with India over the unprecedented covid-19 situation.

During his talks with EAM Jaishankar, Sheikh Abdullah said the leadership, government and people of the UAE are in full solidarity with India.

He had also reaffirmed the longstanding relations between the UAE and India and the comprehensive strategic partnership between the two friendly countries. He had also said that global action was fundamental in overcoming the fallout of the pandemic.

The UAE and India boast longstanding strategic relations that started in 1972 with the initiation of diplomatic relations between the two nations that grew into fruitful cooperation based on mutual trust and common interest across all fronts. These privileged relations fructified into the signing of a comprehensive strategic partnership agreement between the two countries in 2017.