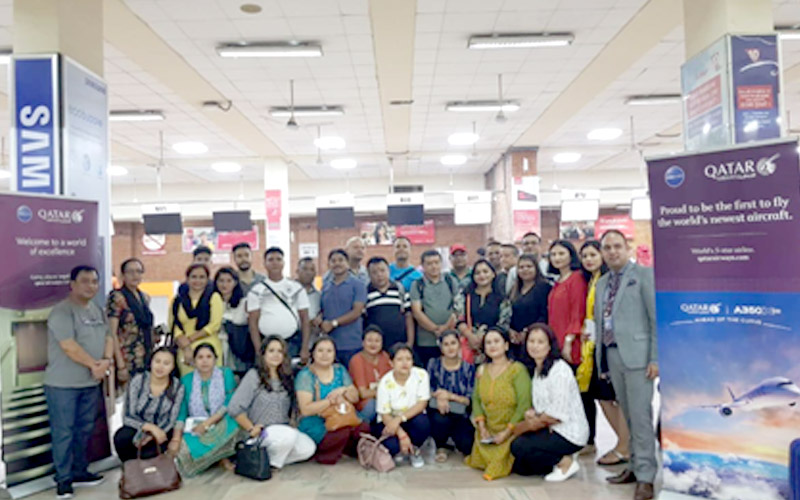 Kathmandu, Qatar 15. As the Official Partner and Official Airline of FIFA, Qatar Airways is celebrating the kickoff of the 2018 FIFA World Cup RussiaTM by bringing football fans from around the world to Russia to watch one of the most highly-anticipated events on the global sports calendar.

To celebrate the start of the tournament, Qatar Airways Nepal, first time in History is taking  massive groups to watch the much awaited world cup

The Prominent conglomerate  are sending their dealers and important customers to Russia to experience World cup as part of their  incentive programe.Qatar Airways has more than 500 football fans going to watch the world cup in Russia.

The 1st slot of 36 passengers are heading to Moscow today .this group has been organized by Jwalakhel Distillary to reward its Dealers and to provide them with a life time experience.

The award-winning airline recently captured the excitement of the upcoming tournament by launching its new 2018 FIFA World Cup RussiaTM campaign, featuring a re-recording of the classic song ‘Dancing in the Street’ sung by renowned singer and TV star Nicole Scherzinger. The upbeat TV commercial has seen tremendous global success, with more than 20 million views across the airline’s social media platforms, including Facebook, Twitter, Instagram and YouTube.

Last month, the carrier launched its ‘FIFA Fan Match’ social media contest. Participants were asked to describe themselves using five emojis for a chance to win tickets to watch the semi-finals in Saint Petersburg. The highly-engaging campaign was tremendously successful, with five lucky winners from around the world looking forward to attending the World Cup semi-finals match in Russia.

In celebration of the 2018 FIFA World Cup™, Qatar Airways, in collaboration with SC and Hamad International Airport (HIA), have transformed HIA into a fan zone, ensuring that the thousands of passengers travelling through it never miss a moment of the World Cup’s excitement. Dedicated football fans transiting through the airport will be able to watch the matches, which will be broadcast live in three beautifully themed viewing areas in concourses A, B and C, as well as in Qatar Duty Free’s (QDF) Marché restaurant. The three viewing areas have been designed to resemble a living room, a stadium and a majlis – a traditional Arabic seating area where guests are received.

Earlier this year, Qatar Airways signed an MoU with Moscow’s Vnukovo International Airport, Russia’s third-largest airport, committing to a potential acquisition of up to 25 per cent of the airport’s total shares, complementing the strong ties established with the country, and in support of the airline’s existing investment strategy.

To celebrate the Year of Culture between the State of Qatar and Russia, the airline also earlier this year announced a five-year partnership with Cosmoscow International Contemporary Art Fair, a prestigious event that unites the contemporary Russian art market and helps its contributors establish contacts with the international art community.

In May 2017, Qatar Airways announced the groundbreaking sponsorship deal with FIFA, which saw the award-winning airline become the Official Partner and Official Airline of FIFA until 2022. The partnership, one of the biggest sporting sponsorships in the world, gives Qatar Airways extensive marketing and branding rights at the 2018 FIFA World Cup Russia™ and the 2022 World Cup Qatar™, with an expected audience reach of more than two billion people per tournament.

The award-winning airline has received a record number of accolades recently, including ‘Airline of the Year’ by the prestigious 2017 Skytrax World Airline Awards, which was held at the Paris Air Show. This is the fourth time that Qatar Airways has been given this global recognition. In addition to being voted Best Airline by travellers from around the world, Qatar’s national carrier also won a raft of other major awards at the ceremony, including ‘Best Airline in the Middle East’, ‘World’s Best Business Class’ and ‘World’s Best First Class Airline Lounge’.

Qatar Airways recently revealed a host of upcoming new global destinations, including the announcement that it will be the first Gulf carrier to begin direct service to Luxembourg. Other exciting new destinations to be launched by the airline include Tallinn, Estonia; Valletta, Malta; Langkawi, Malaysia and Da Nang, Vietnam. 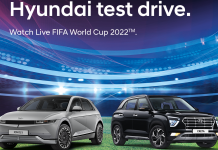 Test-drive your way to Qatar with Hyundai

WTO reaches its first ever trade deal at Bali meeting