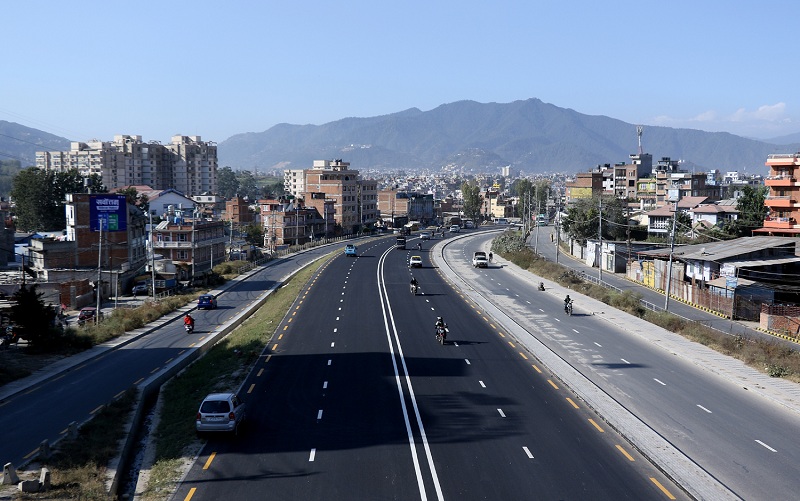 Kathmandu, Jan 28 . The Koteshwor-Kalanki road has been handed to the government. The widening of a 10.5 km road section under the Kathmandu Ring Road Improvement Project was carried out by the government of China. It had began five years ago and concluded last month.

Chinese Ambassador to Nepal Ms Hou Yanqi handed the key of the road to Prime Minister KP Sharma Oli amidst a programe today at the Khumaltar-based Office of National Trust for Nature Conservation. On the occasion, the two jointly declared the road opened.

Prime Minister Oli described the relations existing between Nepal and China incomparable and trouble-free. “The Chinese government has been assisting Nepal in multiple sectors such as road, agriculture, education and health.”

He pledged not let problems surfaced in the project’s first section recur in the second phase works. He directed all ministries and department concerned to well facilitate the project implementation and timely deal with obstructions in road projects caused by water pipelines, electric poles and so on.

The ambassador defined the project as a testimony to cordial relations between Nepal and China. “The road connects to other two roadways (Araniko Highway and Prithvi Highway) which were also sponsored by China. The bilateral friendly ties are further being consolidated.”

Secretary at the Ministry of Physical Infrastructure and Transport, Madhusudan Adhikari said the completion of the road was possible due to support from all sides.

Rabindranath Shrestha, director general at Department of Roads, informed the programme that the works of second phase would begin soon.