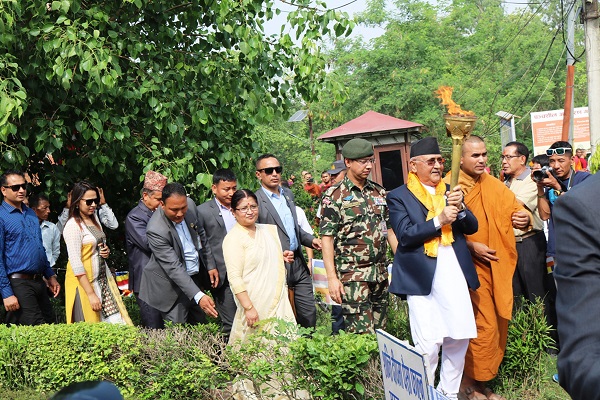 Rupandehi, May 18 . Prime Minister KP Sharma Oli has pledged to develop Lumbini, the birthplace of the Buddha, as a place of inspiration for the world peace.

He made this pledge while addressing the Sangha Daan programme organised at the Thai Monastery in Lumbini on the occasion of the 2563rd Buddha Jayanti today.

PM Oli expressed the commitment that works would be pursued in collaboration with the Buddhist community for giving a new life to Lumbini.

“Many efforts for the development of Lumbini have been taking a concrete shape in the past years. The government from this year has moved ahead in a planned manner for further developing Lumbini as a sacred place propagating the Buddha’s message to the world,” he said.

Recalling the collaboration with 19 Buddhist countries, he said the government would concentrate on Lumbini’s development.

On the occasion, vice-chair of the Lumbini Development Trust, Vikkhu Metteya expressed the commitment to increasing the religious and tourism activities in Lumbini.

In the morning, he initiated a sapling planting function at the New Lumbini Village. As many as 2,643 saplings would be planted in Lumbini this year. This many plants will be planted marking the 2,643 years of the Buddha’s birth.

After attending the afforestation programme, the PM participated in a Peace Rally from the Mayadevi temple premises to the Peace Lamp. At the peace lamp spot, he handed over the peace torch to Olympian Baikuntha Manandhar.

After participating in the peace torch handover ceremony, he attended the Sangh Daan programme where he made donations to the monks and nuns at the Thai Monastery. He presented the chibar (robe), the asthapariskar and food items to 150 monks and nuns on the occasion.

He then attended the Lumbini Visit Year inauguration and the Buddha Purnima main celebration programme.

“Phase-wise programmes would be carried out for Lumbini’s development”
Addressing to the Buddha Purnima, Lumbini Day and Lumbini Visit Year 2076 Inauguration Programme, the Prime Minister said that the government would carry out different programmes in a phase-wise manner for the development and promotion of the Lumbini area.

He said Lumbini would be developed as a spot of knowledge and meditation. Stating that consultations were on with the world community for organizing an international conference, he said the support and cooperation of the international community was needed for the rapid development of Lumbini.

State 5 Chief Minister Shanker Pokhrel said Lumbini would be developed and promoted throughout the world with the support and cooperation of the federal and state governments.

He added that the works for developing the Buddha’s birthplace should be speeded up, emphasizing on the need of carrying out the archaeological excavations at other places related to the life of the Buddha and bringing out new facts.
State 5 government minister for tourism, Lila Giri said the state government has declared the Lumbini Visit Year for promoting Lumbini which will help prepare the base for the state’s prosperity.

LDT vice-chair Bhikkhu Metteya reiterated that the Lumbini Master Plan would be completed in the next three years and the face of Lumbini would change after that.
At the programme, eight persons including the Rastriya Samacahr Samiti (RSS) journalist Nira Gautam were honoured for contributing to promoting Lumbini. (Photo available)