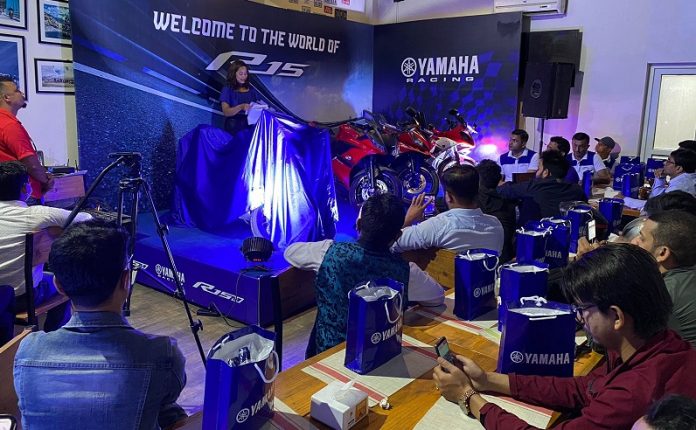 Kathmandu, May 23. Yamaha’s well-facilitated R15M has officially entered the Nepalese market today. MAW Enterprises, the official distributor of Yamaha for Nepal, revealed the bike at the company’s exchange fair “Maha Exchange Mela”, organised from May 28-April 04.

The bike was launch at a press conference at Genesis Cafe. Yamaha Nepal claims R15 M is the most advanced motorcycle contrived with the latest technology and features among the bikes brought in Nepal.

Called the fifth generation of the most popular bikes in the racing world, the M1 and R-Series, the R15 M is primarily aimed at youngsters interested in track speed, curves, and sports bikes. And, new graphics, 3D emblem, Y-Connect and features like ‘Two-Level Seat’ made with great skill have made this bike more attractive, reliable, intelligent, efficient and comfortable, the company said.

Apart from this, the company said that the advanced systems like ‘Assist and Slipper Clutch’ and ‘VVA’ have made the R15M more precise, agile and efficient, taking the racing quotient to the next level. The adaptation of an A&S (assist and slipper) clutch reduces the weight of the clutch pull and provides low-stress shifting during deceleration, making gear downshifts more smooth and enjoyable. At the same time, the high-performing VVA system provides torque for ease of use even at low RPM. According to the company, there are two intake valve cams, one for low- to mid-range rpm and another for high rpm.

Commenting further on the bike, the company said the bike is engineered with two riding modes: Street and Track. According to the company, riders can now ride the bike as per the situation on the road. On roads with less traffic, riders can switch to ‘track mode’ for high performance. Likewise, for a city ride with economic performance, the bike can be switched to ‘street mode.’

According to the company, R15 M is manoeuvred with an improved aerodynamic body design for better airflow management and stability, enabling the rider to reach the top speed faster and Dual Channel ABS for precise and reliable braking. Furthermore, the bike is equipped with a ‘Traction Control System’, a dedicated electronic system that reduces the chances of wheelspin. Similarly, ‘The Quick Shifter’ allows for a clutchless shift of gears enabling comfort by eliminating the need to use the clutch or throttle before and after a gearshift. R1M is powered by a 155 CC LC4V SOHC FI Engine that produces 14.2 Nm @ 7,500 rpm of Maximum Torque and 18.4 HP @ 10,000 rpm of maximum power.

Besides, Raju Chhetri, CEO of Yamaha Nepal, said that the LCD Instrument Cluster, which includes ‘Y Connect’ technology, which is more advanced than ‘Connect X’, has made the R15 M not only innovative but also multifaceted.

Available on ‘Google play store’ and ‘Apps store’ for users of Android and Apple mobile phone users, the LCD instrument cluster after integrated with the Y-connect displays:

In addition, via Y-Connect, riders can also view notifications such as phone calls, SMS and email alerts on the bike’s LCD cluster.

The R15 M, which will be available in Yamaha showrooms across Nepal from Sunday, is priced at Rs 579,900/- in the Nepali market, the company said.

Likewise, along with the bike’s launch, the company has also launched its new scheme, “Road to MotoGP”. “Road to MotoGP” is a scheme offered at the purchase of Yamaha bikes, in which four lucky winners will get a chance to watch the MotoGP Live from Yamaha Paddock at Chang International Circuit, Thailand. The scheme applies to all Yamaha bike and scooter purchases from today, the company said.