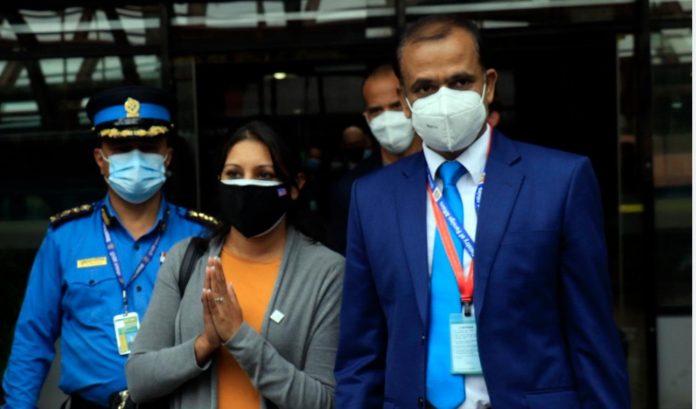 Kathmandu, Sept 9. Vice Chair of the US agency of Millennium Challenge Corporation (MCC) Fatema Sumar and Jonathan Brooks, Deputy Chair, have arrived in Kathmandu this morning on a four-day visit to Nepal.

The MCC officials arrived from Qatar. While in Nepal, the delegation led by Vice Chair Sumar is scheduled to hold separate meetings with Prime Minister Sher Bahadur Deuba, Finance Minister Janardan Sharma and Energy, Water Resources and Irrigation Minister Pampha Bhusal, the Ministry of Finance said. This is MCC’s first visit at the highest level after the signing of the MCC Compact.
It is viewed with interest and importance after the bilateral agreement on the Millennium Challenge Compact was signed between the Government of Nepal and the Millennium Challenge Corporation of the US Government four years ago to reduce poverty and promote sustainable socio-economic development.
The agreement was signed between the MCC on behalf of the US government and the Ministry of Finance on behalf of Nepal. The visit is being watched with interest in the political circles as well as at the grassroots level over the Rs 50 billion assistance received from the United States as a grant for the implementation of road infrastructure, construction of a 318 kilometres long power transmission line with a capacity of 400 kilovolts and three high-capacity substations and other physical infrastructure development projects including the repair and maintenance of maximum 300 kilometres strategic road in Nepal.
However, they are coming to Nepal to take stock of the procedural progress of the MCC project. The previous government had recognized the MCC-assisted project as a project of national pride, approved an environmental impact assessment and gave priority to land acquisition and construction of trans-border transmission lines.