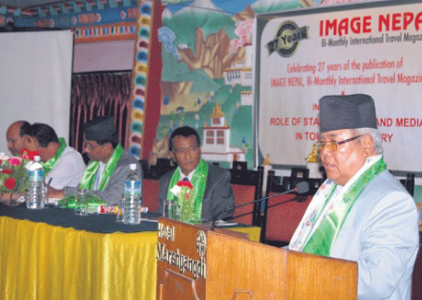 Kathmandu, July-10 Minister for Culture, Tourism and Civil Aviation Kripasur Sherpa has said private sector and government agencies should put joint efforts to bring tourism, which suffered severe setback due to the devastating earthquake, back on track from the autumn season.

Speaking at an interaction on ‘Role of Stakeholders and Media in Tourism Recovery’ organized in Kathmandu on Wednesday by IMAGE NEPAL — a bi-monthly international travel magazine to celebrate its 27th anniversary, Minister Sherpa said media has a greater role to play in tourism recovery as there is a need to disseminate positive message to major tourist generating markets.

Similarly, Tourism Secretary Suresh Man Shrestha said the government has put tourism sector in priority. “The main focus of government’s policy and programs for fiscal year 2015/16, which was unveiled on Wednesday, is on infrastructure development,” he added

Speaking at the program, Hari Raj Joshi, editor of IMAGE NEPAL, said the tourism industry should treat tourism-based media as their partners and extend necessary support and cooperation accordingly

Young entrepreneur tourism entrepreneurs said the government should put focus on infrastructure development. “We have comparative advantage over our neighboring markets in terms of tourism. We have abundant raw materials (for tourism) throughout the country, we only need to exploit our potentials,” added Simkhada

Finance Minister off to Bali

Chittagong Hill Tracts In  Bangladesh Towards Peace And Prosperity