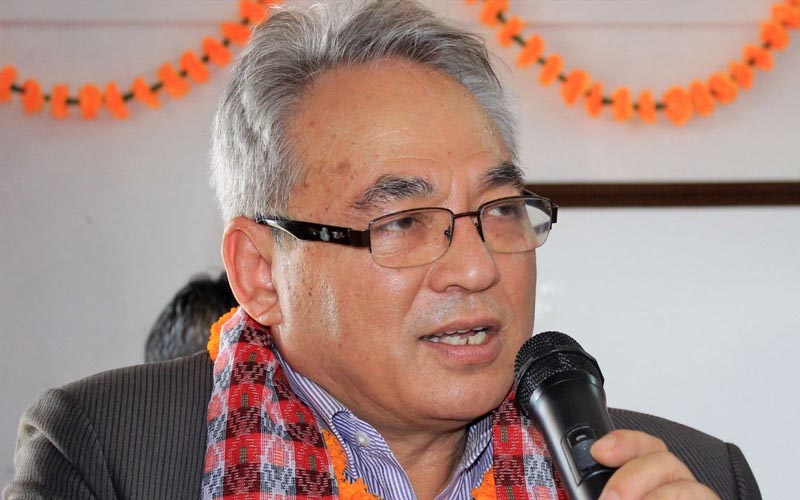 Surkhet, Jan 25 .Home Minister Ram Bahadur Thapa has said Millennium Challenge Corporation (MCC)  the assistance proposal put forth by the US government for Nepal, would be endorsed by the House only after amendments to the unwanted provisions.

Discussions in regard with the  (MCC) were centered on the interest of the nation and it would be presented in the Parliament following the declaration of the House Speaker.

In his reply to journalists’ query about the compulsion of passing the MCC through the House, the Home Minister it would be passed by the US Senate that’s why here in Nepal it should be prosecuted by the House.

Minister Thapa said so while addressing a press conference here today. He had arrived here to attend the two-day seminar on security organised jointly by the Government of Nepal, the Ministry of Home Affairs and the Karnali State Government’s ministry of internal affairs and law here on Friday.

“We have achieved notable success in controlling trans-border crime. The government has been conducting the campaign to eliminate Chhhaupadi practice as part of culture change and this is also having a positive impact in society,” he said.

Stating that the export has increased in the recent months, Home Minister Thapa reiterated the government’s target of achieving 8 per cent economic growth rate. He pointed out that the government has also expedited the development activities. Minister Thapa said the Investment Summit organised by the government and the state visit of Chinese President Xi Jinping to Nepal were both beneficial to the country.

As he said, the proposal would be passed without causing any harm to Nepal’s sovereignty and independence. Efforts are on to bring the Biplav-led group to the mainstream of politics, according to him.

He took the occasion to share that the Police Bill had been already passed by the House and only it’s authentication by the President is awaited.

As he said, efforts are taking place at the diplomatic level to find a solution to debates emerged in the aftermath of the release of India’s new political map and to mend the bilateral relations with the south turned sour because of the same map.  RSS

Issuance of LCs dropped by 50%