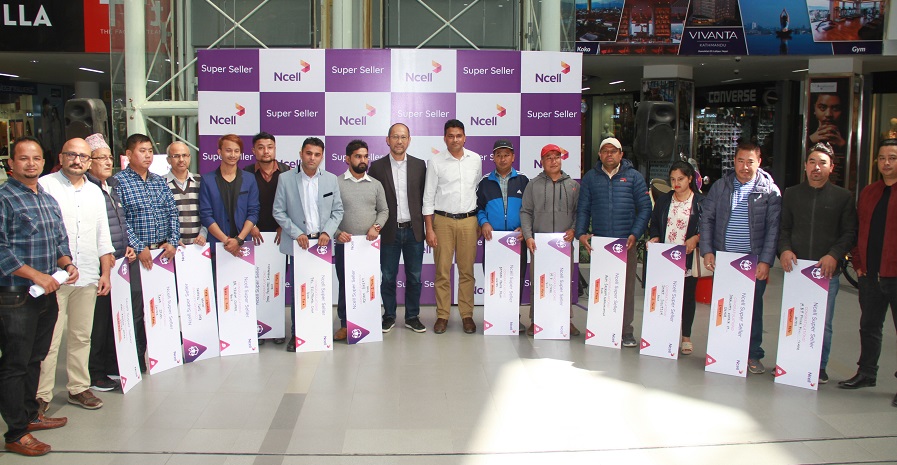 Kathmandu, Nov 11. Ncell Private Limited has handed over prizes to 14 point of sales (PoS)/retailers of Kathmandu and Lalitpur as a part of its ongoing campaign ‘Ncell Super Seller’. The retailers on Monday received prizes—gold, laptop, mountain bike and washing machine amidst a function.

The prizes were handed over to the first 14 retailers jointly by Andy Chong, CEO of Ncell and celebrities Sandeep Lamichhane, Priyanka Karki and Shiva Pariyar. Ncell will continue to hand over prizes to eligible PoS/retailers across the country under this scheme.

Retailers in the programme said they were encouraged by this campaign of Ncell and feel happy to be a part of Ncell business.

‘Ncell Super Seller’ campaign is in place from March 15 for a period of 10 months. For participation in this campaign, retailers will have to earn a defined points by accumulating points from every purchase of recharge cards and sales of SIM cards and Virtual Fund Transfer (VFT).

Under this scheme, retailers can choose to be in one among the four groups defined as Platinum, Gold, Silver or Bronze to participate and win attractive prizes like car, Europe tour Package and iPhone X as bumper prizes.

Apart from the bumper prizes, retailers achieving the defined points can get an opportunity to win prizes including bike, scooter, 55 inch smart TV, air conditioner, iPad, electric treadmill, washing machine, and laptop among others.

6.7 magnitude earthquakes rattled in Manipur of India, felt in Nepal...