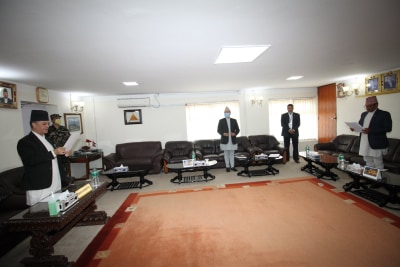 Kathmandu, April 7. Newly appointed Governor of the Nepal Rastra Bank (NRB) Maha Prasad Adhikari today took oath of office and secrecy before Chief Justice Cholendra Shumser JB Rana amidst a programme at the Supreme Court.
The government appointed him to the post for a five-year term. Similarly, the NRB’s new governor assumed his office today itself. He reached the NRB central office at Baluwatar after taking the oath.-

World Bank Approves US$ 20 Million for Power Sector Reform and...