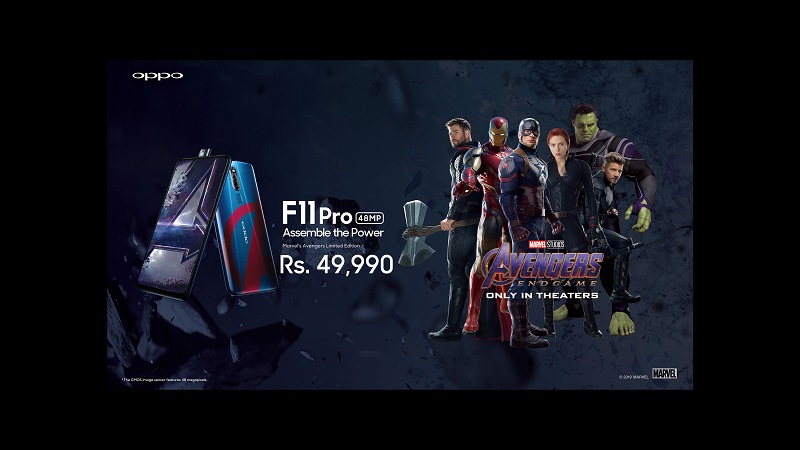 Kathmandu , April 29 .  OPPO unleashed its latest co-branded product, OPPO F11 Pro Marvel’s Avengers Limited Edition in Nepal today; organizing a first sale event with movie screening of Avengers: Endgame, for its selected pre-bookers. To fulfil its ambitions of building an international brand and better communicate with young people around the world, OPPO has developed partnerships and initiatives related to popular culture and the arts. F11 Pro Marvel’s Avengers limited Edition is one of its major outcome and example.

“Many young people idolizes the iconic and powerful Marvel Studios’ Avengers. That’s why we teamed up with the film, Marvel Studio’s Avengers: Endgame, to create something special for all the young Marvel fans everywhere!”, said Bobby Zhao, CEO, OPPO Nepal, ” Inspired by the heroism of Marvel’s Avengers, the OPPO F11 series has also become more than just a Selfie Expert; now transformed to an All-Purpose Portrait Master with its fully upgraded user experience and as most heroic smartphone yet!”

This F11 Pro Marvel’s Avengers Limited Edition’s color is inspired by the movie Avengers: Endgame; and its’ called Space Blue. The blue background is covered with an intricate hexagonal pattern and the back cover features OPPO signature gradient effects. The color finish changes dynamically in different light; from steel blue in the middle, to midnight blue on both sides, as if in a dynamic and mysterious universe.

The bold red Marvel’s Avengers logo, not only forms the attractive red-blue color-blocking with the blue background, but also echoes the red switch button on the side. This big cut logo on the back and the small complete logo above cameras also form a complete aesthetic echo, creating its advanced aesthetic.

At the front of the device, the phone is equipped with breath taking panoramic screen. When turned on, the beautiful wallpaper immediately attracts ones attention, as does the gorgeous Marvel’s Avengers logo that shines brightly.

Each smartphone is specially equipped with a Captain America-themed Case. The case not only offers a comfortable hand-held feeling, but also extra protection and durability. The central-located finger ring is inspired by Captain America’s iconic shield, both similarly beautiful and functional, that frees users’ hands when watching a video and prevents a slip or drop when one is holding it.

The packaging for the F11 Pro Marvel’s Avengers Limited Edition is also especially well-designed and crafted in a premium black color. The black thermo printed Marvel’s Avengers logo is very striking and creates ensembles with endless heroic power. Moreover, each box comes with a stamped collector’s badge, such a meaningful gift for collectors and enthusiasts!

The OPPOF11 Pro Marvel’s Avengers limited edition phone is priced at Rs. 49,990 and will only be available till the stock lasts.

Four Reasons the Facebook Fortune Is Going Into a Limited Liability...

Jet ties up with 6 brands for frequent flyer programme