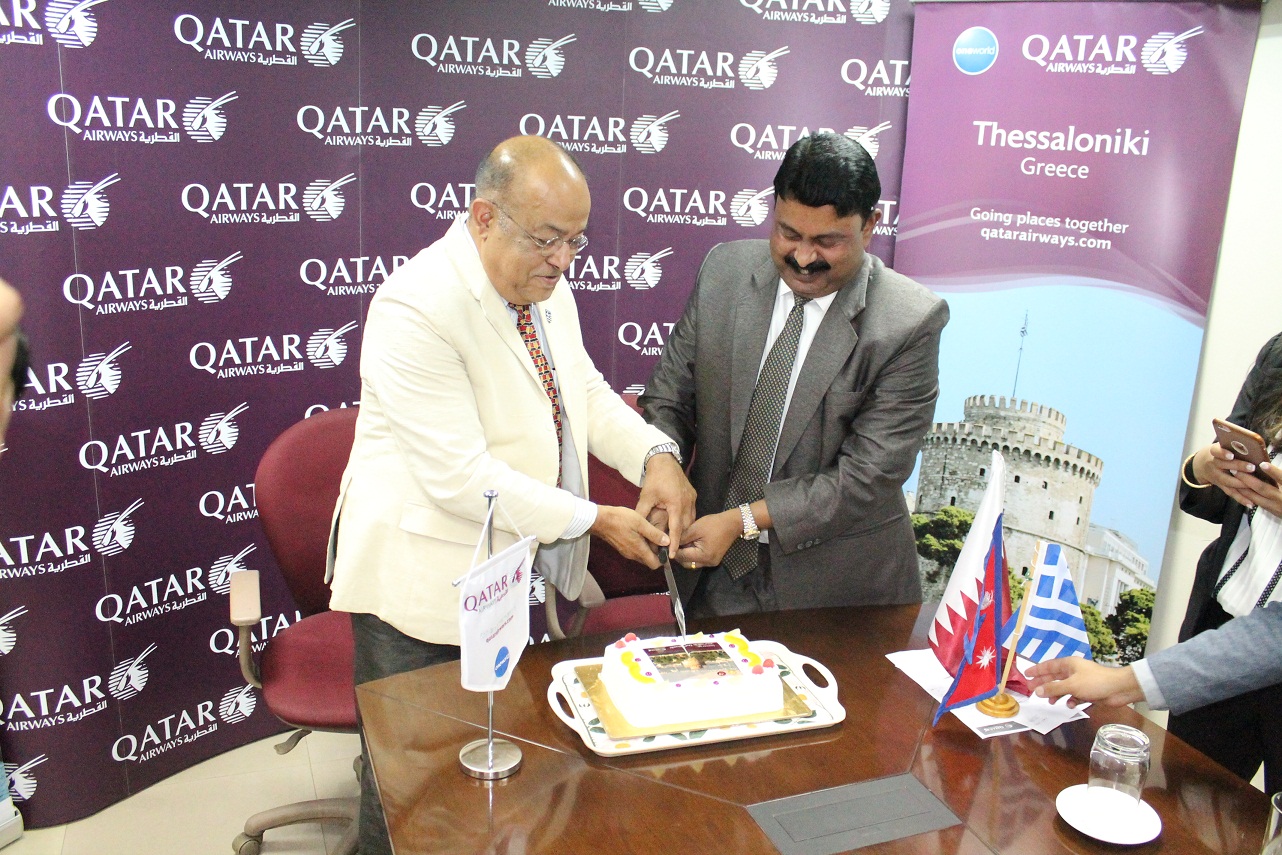 At the briefing, Mr Jay Prakash Nair highlighted the award-winning airline’s robust expansion plans, as well as its commitment to bringing more travelers to Nepal to Greece, and to connect Thessaloniki to its extensive global network via the award-winning Hamad International Airport (HIA) in Doha.

“We are tremendously excited to launch our 4 weekly flight service to Thessaloniki, our second destination in Greece. Having 3 daily flights to Athens, we realized the growing demand in Greece, and what better place than the Thessaloniki?

“This new 4 weekly flight service will without doubt offer our Greece passengers more convenience and alternate choice in addition to Athens.

Honorary Consul Mr. Bikram Pandey: “We appreciate Qatar Airways’ strong support for Greece. An airline of this stature will further boost Thessaloniki’s reputation as a leading tourist destination. Greece economy will certainly go up by 2020 and once again the country will flourish.

The launch of 4 flights a week to Thessaloniki with Airbus 320 aircraft. Qatar Airways already operates  3 daily service to Athens .

Qatar Airways has added many new exciting destinations to its network in 2017/18, including Auckland, New Zealand; Dublin, Republic of Ireland; Nice, France; Prague, Czech Republic; Chiang Mai, Thailand and Penang, Malaysia, to name a few. The airline will continue its rapid expansion throughout 2018 by adding many more new destinations to its global route map, including Cardiff, United Kingdom; and Malaga, Spain and many more.

The national carrier of the State of Qatar is one of the world’s fastest-growing airlines, with a modern fleet of more than 200 aircraft flying to business and leisure destinations across six continents.

The award-winning airline has received a number of accolades recently, including ‘Airline of the Year’ by the prestigious 2017 Skytrax World Airline Awards, held at the Paris Air Show. This was the fourth time that Qatar Airways has been given this global recognition as the world’s best airline. In addition to being voted Best Airline by travellers from around the world, Qatar’s national carrier also won a raft of other major awards at the ceremony, including ‘Best Airline in the Middle East,’ ‘World’s Best Business Class’ and ‘World’s Best First Class Airline Lounge’.

Amid oxygen shortage, India becomes a white knight for Nepal

Does competition fosters entrepreneurship and growth ?