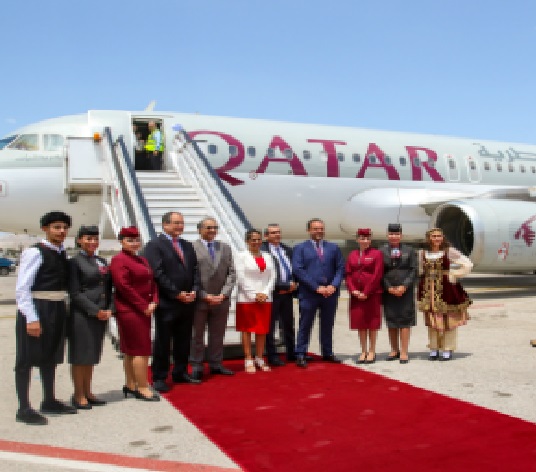 DOHA, May 31. Qatar Airways celebrated the start of its new direct non-stop service from Doha to Mykonos today at Mykonos International Airport. The newly-launched seasonal service to Greece’s most popular island will operate a four-times-weekly service from Doha.

Mykonos is a world–renowned cosmopolitan island and a paradise in the heart of the Cyclades. The small island is known for its picturesque views and beautiful sandy beaches. There are many things to do in Mykonos such as walking along the narrow streets of Chora, watching the sunset from Little Venice, staying in luxurious hotels and swimming in the clear sea of the Aegean. Mykonos holidays are often combined with holidays to Santorini and other Cycladic islands.

Qatar Airways Group Chief Executive, His Excellency Mr. Akbar Al Baker, said: “We are thrilled that we have further expanded our operations to the beautiful island of Mykonos, only two months after the launch of service to Thessaloniki. Today’s inaugural flight to popular Mykonos marks further growth and strengthening bonds between the State of Qatar and Greece.

“We are looking forward to further enhancing this relationship, connecting Mykonos to Qatar Airways’ extensive global network and helping to open up and develop these attractive destinations for business and leisure travellers from around the world.”

Chief Executive Officer of Fraport Greece, Mr. Alexander Zinell, said: “It is with great pleasure that all of us at Fraport Greece welcome Qatar Airways’ new route from Doha to Mykonos. Mykonians, who have turned their island into a unique global touristic attraction, will now welcome passengers arriving four times a week directly from Doha. This new route offered by our partners from Qatar Airways links these two beautiful and diverse worlds, enabling travellers to reach their destination fast and in five-star comfort.”

Qatar Airways currently holds the title of ‘Airline of The Year’ as awarded by the prestigious 2017 Skytrax World Airline Awards. In addition to being voted Best Airline by travellers from around the world, Qatar’s national carrier also won a raft of other major awards at the ceremony, including ‘Best Airline in the Middle East’, ‘World’s Best Business Class’ and ‘World’s Best First Class Airline Lounge’.