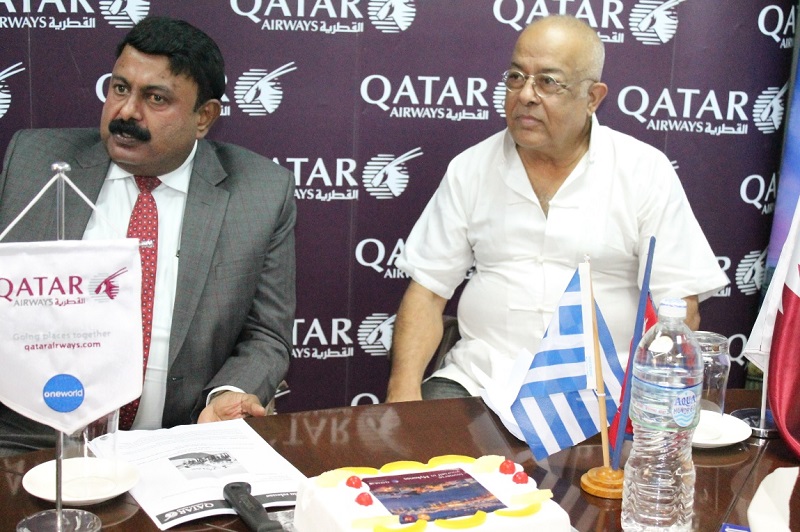 At the briefing, Mr Jay Prakash Nair highlighted the award-winning airline’s robust expansion plans, as well as its commitment in bringing more travelers to Nepal from  Greece, connecting Mykonos to its extensive global network via the award-winning Hamad International Airport (HIA) in Doha.The newly-launched seasonal service to Greece’s most popular island will operate a four-times-weekly service from Doha.

The beautiful island of Mykonos is the third Greek destination in QatarAirways’rapidly expanding global network. Seasonal direct service to the Greek island will be operated four times weekly by an Airbus A320 until 30 September 2018

“We are looking forward to further enhancing this relationship, connecting Mykonos to Qatar Airways’ extensive global network and helping to open up and develop these attractive destinations for business and leisure travelers from around the world.”

“This new 4 weekly flight service will without doubt offer our Greece passengers more convenience and alternate choice in addition to Athens and Thessaloniki.

Honorary Consul Mr. Bikram Pandey: “We appreciate Qatar Airways’ strong support for Greece. An airline of this stature will further boost Mykonos’s reputation as a leading tourist destination. Greece economy will certainly go up by 2020 and once again the country will flourish.

The launch of four-times-weekly service from Doha to Mykonos with Airbus 320 aircraft. Qatar Airways already operates a 3 daily service to Athens, and 4 weekly flights ton Thessaloniki.

Mykonos is a world–renowned cosmopolitan island and a paradise in the heart of the Cyclades. The small island is known for its picturesque views and beautiful sandy beaches. There are many things to do in Mykonos such as walking along the narrow streets of Chora, watching the sunset from Little Venice, staying in luxurious hotels and swimming in the clear sea of the Aegean. Mykonos holidays are often combined with holidays to Santorini and other Cycladic islands.

Qatar Airways currently holds the title of ‘Airline of The Year’ as awarded by the prestigious 2017 Skytrax World Airline Awards. In addition to being voted Best Airline by travellers from around the world, Qatar’s national carrier also won a raft of other major awards at the ceremony, including ‘Best Airline in the Middle East’, ‘World’s Best Business Class’ and ‘World’s Best First Class Airline Lounge’.