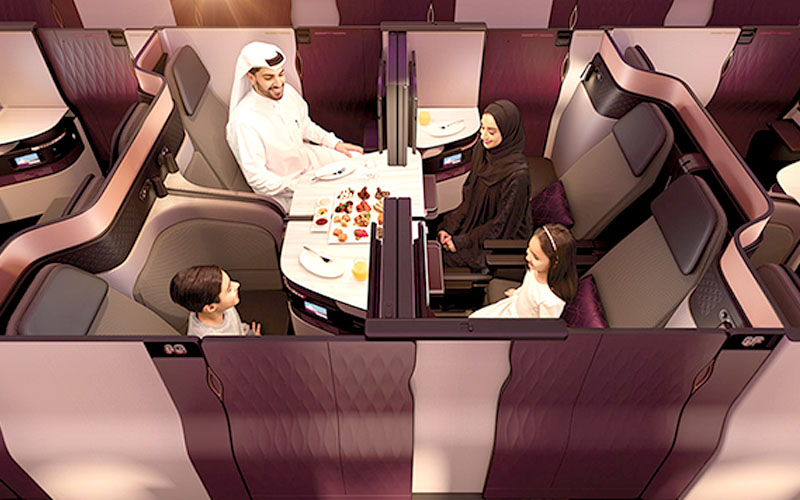 DOHA, Qatar June 11 . Qatar Airways is pleased to announce that its award-winning Business Class experience, Qsuite, will be available on flights to and from Canberra, its newest Australian destination, via Sydney, from 1 July 2018.

The announcement comes less than six months after the airline launched its Canberra route in February 2018. The Doha to Canberra flight makes one stop in Sydney, bringing Sydney residents a second daily service to and from the Qatari hub.

The route will be initially be served by Qsuite up to four times a week, with daily Qsuite service to commence on 1 August 2018.

Qatar Airways Group Chief Executive, His Excellency Mr. Akbar Al Baker, said: “Since its launch, Qsuite has received tremendous attention globally, and we are delighted to introduce this revolutionary product on our Canberra and Sydney routes. With Qsuite, we have truly redefined business and luxury travel, and we are certain that the highly-adaptable and personalised product will be a much-welcome addition for Australian travellers.

“Qatar Airways now offers 4,376 seats daily to and from our five Australian gateways, providing Australians with the most technologically-advanced fleet of aircraft in the skies today, and demonstrating the importance of the market to our network. As we continue to grow in Australia, we are glad to also be contributing to the market by providing greater consumer choice with our award-winning cabins and services, and increased accessibility to global markets for businesses with our robust global network of more than 150 destinations.”

The reigning Skytrax ‘Airline of the Year’ has strengthened its presence in Australia in recent years. Along with the introduction of Qsuite on the Canberra-Sydney route, passengers travelling with Qatar Airways to and from any of its other four Australian gateways can enjoy flying on its state-of-the-art modern fleet, consisting of the iconic A380s to Melbourne, Sydney and Perth; while south Australians benefit from the airline’s A350 daily service to Adelaide.

Since the launch of services to Australia in 2009, Qatar Airways has carried more than three million passengers on its flights to Australia, supporting its AUD40 billion international tourism industry. These services have also helped connect Australian exporters to the world via belly-cargo capacity, enabling trade between Australia and the State of Qatar valued at AUD947 million in 2016-17.

Patented by Qatar Airways, Qsuite features the industry’s first-ever double bed available in Business Class, as well as private cabins for up to four people with privacy panels that stow away, allowing passengers in adjoining seats to create their own private room, a first of its kind in the industry. Adjustable panels and movable TV monitors on the centre four seats allow colleagues, friends or families travelling together to transform their space into a private suite, allowing them to work, dine and socialise together. These new features provide the ultimate customisable travel experience that enables passengers to create an environment that suits their own unique needs.

Qsuite is currently available on select Qatar Airways’ Boeing 777-300ER, Airbus A350-900 and A350-1000 aircraft. The expansion to Canberra follows the introduction of the product to various destinations around the globe, including London, Paris, New York, Chicago, Houston and Shanghai.

Qatar Airways currently holds the title of ‘Airline of The Year’ as awarded by the prestigious 2017 Skytrax World Airline Awards. In addition to being voted Best Airline by travellers from around the world, Qatar’s national carrier also won a raft of other major awards at the ceremony, including ‘Best Airline in the Middle East’, ‘World’s Best Business Class’ and ‘World’s Best First-Class Airline Lounge’.