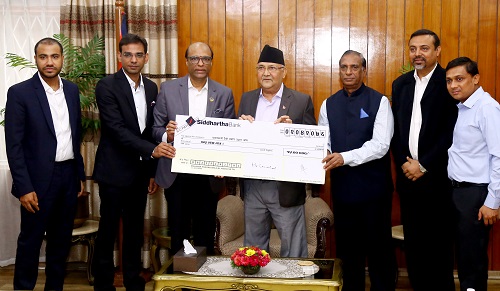 Treasurer of Kedia Organisation Trust, Madan Lal Kedia, and Union Chair Punya Prasad Dhakal handed over the cheques to PM Oli at the official residence of the Prime Minister at Baluwatar.

On the occasion, PM Oli said that support of employees was necessary to make administration healthy and transparent and expressed the belief that people would get positive message towards the government if employees become service-oriented.

Saying some of the people launch agitation before putting forth demands, Prime Minister Oli said, “We have already established democracy system. Now, it is not necessary to launch agitation to get their demand addressed.”

He clarified that the government has launched monitoring system of good-carrier vehicles to end leakage and irregularities.

Royals put finishing touches on wedding ahead of big day

Net profit of Nirdhan Utthan bank increased by 24%, net worth...