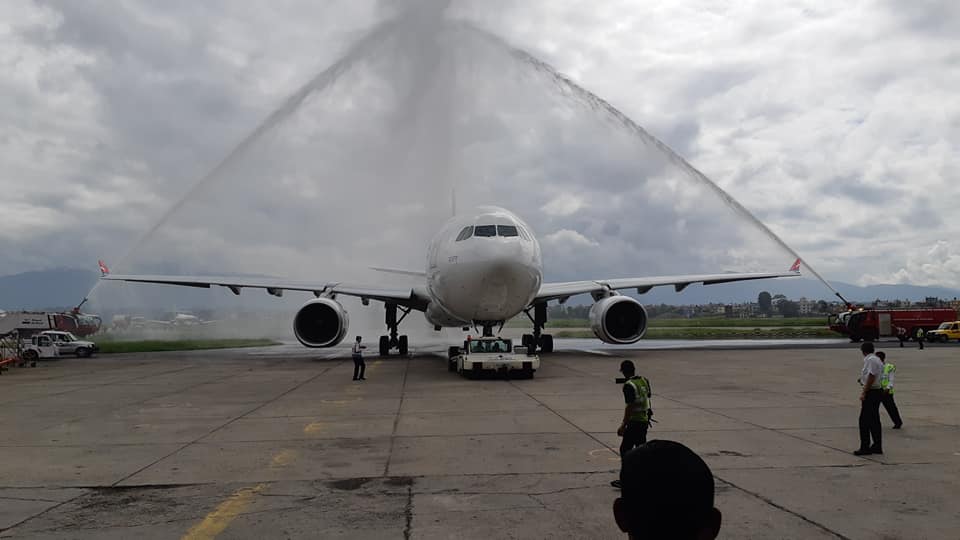 The addition of the new aircraft is a part of NAC plan to purchase two Airbus A330-200 series wide-body aircrafts. Earlier, first aircraft purchased by the NAC arrived here on June 28.

The NAC in April last year had signed a purchase agreement with the United States-based AAR Corporation to buy the two 274-seater aircrafts worth $ 209.6 million.

The NAC purchased the aircraft named ‘Makalu’ at approximately Rs 24 billion after taking loan from the Employees Provident Fund (EPF) and Citizens Investment Trust (CIT). On June 11, the NAC had signed a loan agreement with the EPF and CIT.

The aircraft by the Airbus Company was built in Toulouse city of France. It arrived here following a nine hours flight from Toulouse carrying NAC General Manager Sugat Ratna Kansakar and Captain Srawan Rijal, among others.

The aircraft was welcomed with a water canon salute. Secretary at the Tourism and Civil Aviation Ministry Krishna Prasad Devkota and other high-ranking officials of the NAC were present on the occasion.

Talking to media-persons, Secretary Devkota said the NAC would purchase other 10 aircrafts within next five years.

As per the NAC, there is necessary of 116 pilots at a time when the NAC has brought two wide-body aircrafts. Now, the NAC has only 88 pilots.

Trump: media is ‘Enemy of the People’