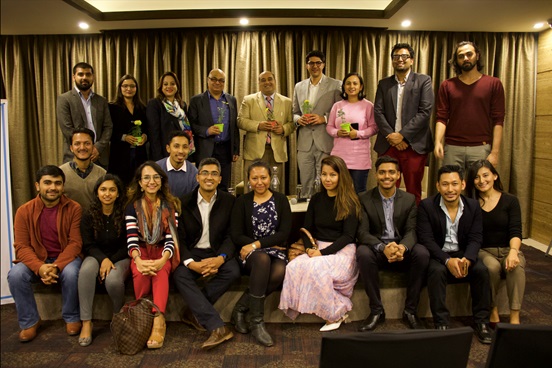 Of the first question asked by our moderator Princi Koirala was, what is agile. Agile, while a term used in technology, is unused in other businesses.

“We are in an era where the father knows best, the entrepreneur knows best, doesn’t work anymore. It’s better to think I know a little bit, now let the system teach me,” says Ashutosh Tiwari, Founder and Managing Director of Safal Partners on his definition of “agile”.

“When building software, there’s a lot of deviation outside the plan, so developers thought how about we plan for even shorter sessions. This is “agile” across different industry,” said Pudasaini.

As the recent advances in technology have the potential to fundamentally redefine modern life by giving rise to new business models and industries, the panel discussed both challenges and opportunities for emerging businesses.

“I think finding alternatives in local products like jute, could not only help the environment but also reduce the trade deficit that we have,” said Shilshila Acharya, CEO of Himalayan Climate Initiative said in the context of starting new businesses.

However, startups aren’t easy and may require a lot of sleepless nights and turmoil, shared Sakar Pudasaini on his experience with Karkhana.

Starting your own business requires capital, a fact that is very important and must not be undermined , said Tiwari, who also recommended that people not quit their jobs unless they had tested their ideas.

“ The number one reason that companies fail in Nepal is because of working capital management. Cash conversion is slow in Nepal,” said  Shabda Gyawali, investment director of Dolma Impact Fund.

“ What I would like to propose is regulation for public welfare. The question to ask is, has a company added to the  public welfare of the society? Pathao, Tootle, Foodmandu for example,” said Tiwari.

Over 118 kilos of illegal gold confiscated from Tatopani point in...