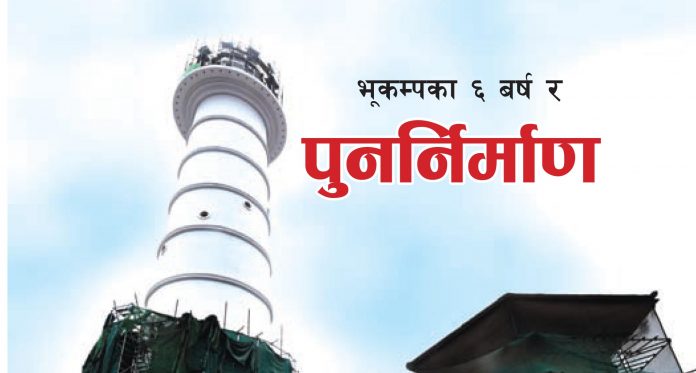 Kathmandu, April 23. It has been six years since the devastating earthquake of April 25, 2015 with its epicenter in Barpak of Gorkha caused a huge loss of lives and properties. First of all, we would like to express our deepest sorrow over the loss of lives in the sad incident and would offer prayers in their memory.

Six years after the earthquake, we now stand here with better and stronger reconstruction than before. We are very pleased to inform you that Nepal’s reconstruction has now reached the stage of completion despite various hurdles and complexities. We are, at the moment, committed to complete the reconstruction of basic infrastructures within this fiscal year and making necessary plans to handover the remaining works to the concerned government agencies.

As you all know, the National Reconstruction Authority (NRA) was established on December 25, 2015 with a primary aim to reconstruct and rehabilitate the structures damaged in the earthquake and its aftershocks. Sixty four months after its establishment, the NRA has used disaster as an opportunity and has already reconstructed a large number of private houses, educational and health institutions and cultural heritage sites in 32 earthquake-affected districts and some infrastructures are in the final stages of reconstruction.

We have now reached a point where we can proudly present our achievement, experience and learning of reconstruction and rehabilitation to the outside world. At this time, I would like to express sincere gratitude to all three tiers of governments, various social and professional organizations, international community, non-governmental organizations, staff, local community, citizens and media for their direct and indirect support to this huge campaign of post-earthquake reconstruction and rehabilitation.

We have made satisfactory achievement in reconstruction and rehabilitation by managing the risks posed by Covid-19 pandemic. There has been 93 percent progress in the reconstruction of private houses which is the main area. Out of 811,754 earthquake beneficiaries who have signed agreement for the government grant, 753,104 beneficiaries (93 percent) have started rebuilding their houses. First installment has been distributed to 99.86 percent beneficiaries, 86.78 percent beneficiaries have received the second installment while 78.66 percent has received the third and final installment. We are confident that the basic works of reconstructing private houses will be complete within this fiscal year.

During the reconstruction of private houses, we addressed 634,973 grievances. For those who are not satisfied with the NRA’s response on grievances, they can now register their complaints at the district level and we have made arrangements to address the grievances through the Appellate Committee.

Besides, the NRA has carried out a special campaign to rebuild the houses belonging to vulnerable groups by mobilizing 900 mobile masons and 254 social mobilizers. Various partner organizations have also been mobilized in this process. Many houses of these vulnerable groups are currently being built.

Similarly, we have provided land to 4,720 beneficiaries who had been living in 299 vulnerable areas after the earthquake. We have also created an environment to build houses of 12,788 landless beneficiaries by providing necessary land.

As for rebuilding cultural heritage sites, 493 out of 920 sites have been reconstructed while 288 of them are under-construction. Rt. Honorable President Bidhya Devi Bhandari has already inaugurated the reconstructed Ranipokhari and Rt. Honorable Prime Minister KP Sharma Oli is set to inaugurate Dharahara on April 24 at 11 am. I would like to invite all the media persons to attend the inauguration by adopting necessary health protocols.

The Rt. Honorable Prime Minister inaugurated the northern, southern and eastern facades of Singh Durbar, the main administrative center of the nation, on February 15 this year and the Office of the Prime Minister and Council of Ministers has already started functioning from reconstructed building.

The restoration of historic buildings Keshar Mahal, Babar Mahal, Bal Mandir and Ranoddip Palace in the Narayanhiti Museum premise is currently going on. The master plan for the integrated development of the center of Kathmandu that includes Ranipokhari, Tundikhel, Ratna Park, Khulla Manch (Open Air Theater), Bhrikuti Mandap, Rangshala (Dashrath Stadium) and Loktantrik Sangrahalaya (Democratic Museum) is in the final stage of approval. Master plans have also been prepared for the development of Narayanhiti Museum, Gorkha and Nuwakot durbar areas and seven archaeological heritage sites of the Kathmandu Valley.

Similarly, rebuilding of 90 percent out of 415 government buildings has completed. Reconstruction of 214 out of 216 buildings belonging to various security agencies which are being built under the NRA has completed.

During this period, 525 kilometers road out of 762 kilometers needed to be rebuilt has been completed and the rest will be complete within this fiscal year.

During the last five and a quarter years of the NRA, it has made significant achievement despite many challenges like political instability, blockade, lack of financial and human resources, geographic difficulties, transition to federalism, election of three tiers of governments and integration of staff.

You are already aware that the government extended the NRA’s tenure till December 2021 after the Covid-19 halted the progress made in the reconstruction. In the added one year period, the NRA will carry out its regular work till the end of this fiscal year (mid-July). In the period from July 16 to December 25, the NRA will hand over all plans and programs to the concerned ministries and government agencies, except the reconstruction of Ranipokhari, Dharahara, western façade of Singh Durbar and Ranoddip Durbar with the Narayanhiti Museum.

Our neighboring and friendly countries have rendered a huge support in our endeavor to rebuild. Out of 410 billion rupees committed at the donors’ conference, 67 billion rupees were spent in the rescue and relief efforts while 49 billion rupees from the Indian Exim Bank has been reimbursed to the government of Nepal. Hence, the actual commitment was only 294 billion rupees. Out of this, the assured amount agreed by donors is 243 billion rupees.

Likewise, out of about 90 billion rupees agreed for mobilization with non-governmental organizations, 72 billion rupees have already been mobilized. In this way, all amount pledged by the donors has been guaranteed to be mobilized. We are proud to mention here that all the donor agencies and friendly countries have expressed their satisfaction on the progress made in Nepal’s reconstruction.

We are now documenting the experience and learning we have received despite various adversities, believing that they will be useful for our future generations. In this process, we are publishing more than one and a half dozen publications. The international community has praised Nepal’s post-earthquake reconstruction at various occasions and platforms. So, with that belief, the NRA is planning to hold an international conference in the last week of November or the first week of December, coinciding with the government’s plan to hold Sagarmatha Sambad, to share Nepal’s experience and learning with other countries.

During this period, not only have we resurrected the damaged structures the reconstruction campaign has also brought qualitative change. Various studies have shown that it has generated 475 million days worth of employment. Our local people have been employed in the reconstruction while it has contributed in the promotion of our own industries of cement, brick, rod, corrugated sheets, crusher and wood. Thus, the post-earthquake reconstruction has made significant contribution to the national economy.

From the reconstruction process, financial access of 800,000 households has increased through the bank accounts. The acceptance and demand for retrofitting technology has increased. The traditional construction technique has been redeveloped while rebuilding archaeological heritage sites which will now help us rebuild our heritages by adopting necessary protocols of heritage conservation. Various earthquake-resilient engineering technologies have been developed to carry out construction works using locally-available construction material like wood, stone and mud. This would help us strengthen our houses built with stone and mud. This has made important contribution in realizing our dream of making a disaster-resilient country.

During the reconstruction, more than 100,000 trained construction workers have been prepared which includes significant number of women.

We need to develop our country safe from all types of disaster risks on the basis of our experience and learning from the post-earthquake reconstruction and rehabilitation. We have been carrying out disaster management related works in collaboration with recently-established National Disaster Risk Reduction and Management Authority (NDRRMA). From the first week of January to the first week of April, the NRA organized workshops on disaster-resilient development for people’s representatives and staffs of the local governments. Altogether, 1,011 people’s representatives and 799 staffs took part in these training workshops.

We are also working with the NDRRMA to prepare programs for 10-year campaign on Disaster Resilient Nepal. The 18th meeting of the NRA Steering Committee chaired by Prime Minister KP Sharma Oli on April 13 had decided to implement this campaign and had entrusted the responsibility on NRA to prepare necessary programs.

The meeting also decided to prepare a proposal on long-term Urban Renewal Program for the reconstruction and rehabilitation of urban areas of the Kathmandu Valley, along with areas under the World Heritage Site and various heritage settlements.

Under this program, plans are being prepared to carry out reconstruction and rehabilitation by taking integrated approach on private housing, public structures, heritages and infrastructures in light of possible impacts from future earthquakes. We believe that this would help assure institutional memory and sustainability even after the tenure of the NRA.

Similarly, the remaining reconstruction works of schools will be done through the Ministry of Education while the DUDBC will be entrusted with the responsibility of rebuilding health institutions, government buildings and some monasteries and integrated settlements currently under the Central Level Project Implementation Unit (CLPIU-Building).

Likewise, the Department of Archaeology will be responsible for rebuilding archaeological heritages and yet-to-be rebuilt monasteries that are more than 100 years old. The reconstruction of remaining monasteries will be done through the Department of Local Infrastructures in coordination with the Monastery Management Committee.

Also, the National Disaster Risk Reduction and Management Authority will carry out works related to policy arrangements for disaster risk reduction and management, technical assistance and institutional memory of the NRA.

Lastly, the reconstruction works we have carried out is the biggest in terms of damages incurred. Besides, this is also geographically very complex and challenging due to the available human resources and finances compared to developed countries. Therefore, this is no doubt a satisfactory issue for us that we are now taking our responsibility to its logical end. We, once again, express our sincere gratitude to all those who have encouraged us and assisted us in the reconstruction and rehabilitation works.