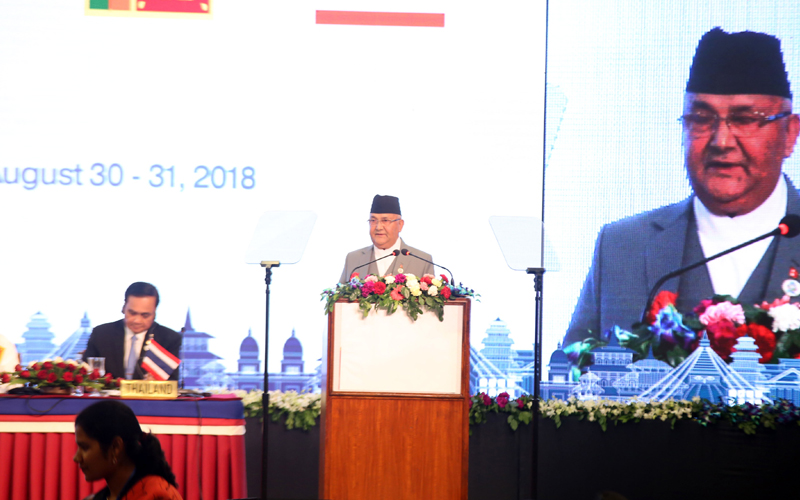 Kathmandu, Aug 30. Prime Minister KP Sharma Oli has said that the vision, commitment and action of the BIMSTEC will have an impact on global political and economic order.

Inaugurating the fourth BIMSTEC Summit in the capital on Thursday, he said the summit brings together a resolve of their leaderships — a resolve for progress and prosperity; and for sustainable development.

“BIMSTEC is an idea that deeper integration can unleash the economic dynamism and address the development needs of countries and peoples, and an idea to accelerate social progress and promote collaboration and partnership”, he said.

The PM further said, “It is a collective commitment for deeper integration of our economies, of our trade and commerce. It is a commitment to seize the opportunities of globalization and shifting of economic locus to Asia”.

In realizing our potentials, we must liberate our people from the clutches of vicious cycle of poverty and deprivation that drains potential and ridicule efforts as well as intentions. “The dream of prosperity falters if we fail to defeat the darkness of poverty”, he asserted.
Calling for the full implementation of the BIMSTEC Poverty Plan of Action, he said they must build on the progress made in the implementation of Millennium Development Goals and integrate the transformative 2030 Agenda for Sustainable Development.
“We have been bearing the heavy brunt of nature’s fury. Disproportionate consequences of climate change have adversely impacted us. Calamities such as landslides and floods have caused colossal loss. Ironically, we are being penalized for the mistakes we never made”, he added.

Prime Minister Oli, also the chair of BIMSTEC Summit, stressed the need for collective preparedness and enhanced collaboration to prevent the perils of such calamities and to adapt to and mitigate the menace of climate change based on the Principle of Common but Differentiated Responsibility and Respective Capabilities.

“Keeping in mind that our region is not immune from dangers of terrorism, organized crimes, drugs trafficking, human trafficking, and money laundering, among others, we must remain united in defeating terrorism in all its forms and manifestations, combating all other transnational organized crimes and maintaining peace and stability for sustained economic growth and development”.

An early conclusion of the agreements on trade in goods, trade in services, investment, mutual assistance in customs matters, dispute settlement and trade facilitation is the need of hour to enable BIMSTEC to effectively move forward, he noted.

“Increased understanding among us is a sine qua non to realize our commitments for free and fair trade”. Our success will depend on lesser barriers and greater trade facilitations; on smooth and uninterrupted transit arrangements; on increased flow of goods and services; and on scaling up of investments.

“Decent jobs and gainful employment for working population, modernization of agriculture, utilization of energy potentials in particular hydro-power, infrastructure development, tourism and development of human resources are among the priorities his government to achieve the goal of Prosperous Nepal, Happy Nepali”.

“Taking note of the simmering uncertainties in multilateralism, we must collectively make a resolve to preserve and maintain multilateralism as the most legitimate process for addressing contemporary challenges of global scale”, he said.

The Prime Minister also asserted that All States- bigger or smaller- must fulfil their responsibilities in good faith and ensure that the principles of fairness and justice are upheld.

“We want to achieve the goal of prosperity and happiness within a democratic framework established by our constitution and on the strengths of uniquely successful peace process”, he said while expressing commitment to democracy, human rights, good governance, rule of law, and social justice.

“Better connectivity of roads, railways, airways, waterways will unlock our full potential. It can promote meaningful cooperation in trade and investment, energy, tourism and technology transfer”, he added. An early adoption of the draft BIMSTEC Master Plan on Transport Connectivity and timely conclusion of transport related regional instruments will help advance our cooperation in this critical area.

He also underlined the importance of developing and operationalizing a Buddhist Circuit in the region to promote connectivity and tourism.

“A strong political will coupled with right mix of policies, institutions and resources can ensure the success of BIMSTEC. As our organization evolves, we should be prepared to adopt a Charter to provide it a solid legal foundation”.