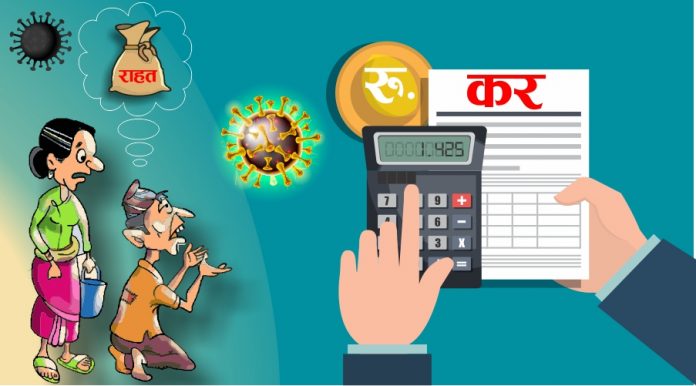 Through the budget presented in both the houses of the federal parliament today, Sharma has increased the income tax limit to Rs 500,000 for individuals and Rs 600,000 for couples.

Up to this limit, only 1 percent social security tax has been paid. A small entrepreneur affected by the Kovid-19 epidemic will be given 75 percent income tax exemption for taxpayers doing business up to Rs 3 million annually. Similarly, taxpayers with an annual turnover of Rs 3 million to Rs 10 million will be provided 50 percent income tax exemption.

According to the budget brought by the government, 50 percent tax exemption will be given to the business taxable income of the tourism sector industries such as hotel, travel, trekking, movie business as per the objective of the Fiscal Year 2078/79.

Similarly, if a special industry is established in the districts of Karnali and Far-Western states to provide employment to more than 100 people, income tax will be fully exempted for 15 years from the date of commencement of business by that industry.

If such an industry is set up to encourage the opening of agricultural tool factories in Nepal, income tax will be fully exempted for five years from the date of commencement of business. Provision has been made to deduct only 1.5 percent advance tax on the author fee received as royalty for literary articles or works.

In order to discourage the import of luxury goods, the rates of import duty including customs duty and excise duty have been increased.

He said that 50 percent excise duty exemption has been given on the import of spare parts or raw materials required for the production of four-wheeled vehicles and a 25 percent rebate has been made in the customs duty.

In his budget speech for the coming fiscal year, Minister Sharma has mentioned that 90 percent discount will be provided on the import duty on sanitary pads and only one percent customs duty will be given on the import of raw materials required for the industries producing sanitary pads in Nepal.

Similarly, provision has been made for levying only 1 percent customs duty on raw materials or spare parts used by industries manufacturing electric rickshaws and electric motorcycles or scooters.

Arrangement has been made to provide 50 percent discount in the customs duty on the import of one transport vehicle purchased by the Agricultural Cooperative for transportation of agricultural products.

Provision has been made to give 75 percent discount in the customs duty on the import of a maximum of two school buses purchased by a community or public school.

Provision has been made to give 50 percent discount on fees or charges for passport renewal, consular services and labor permit renewal to Nepali citizens.

Doha Bank its office in Kathmandu