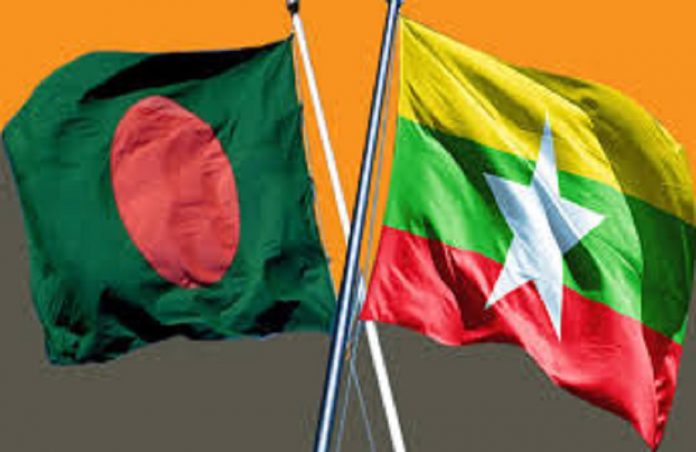 Military diplomacy has long been one of the essential constituents of international diplomacy and an effective methodology, to foster bilateral and regional relationships. Military training cooperation is an essential component of military diplomacy and helps to build close ties with other nations. Such cooperation also helps to strengthen strategic security relationships and address common security concerns.

Bangladesh and Myanmar are two neighboring countries having 271 kilometers of the international boundary. After the independence of Bangladesh. Myanmar recognized Bangladesh on 13 January 1972 as a sovereign state. On 13 August 1973, a general trade agreement was signed between Bangladesh and Burma. Three memoranda of understanding were signed on Jnne1989 to start border trade and economic cooperation.

There is a vast scope for the bilateral relationship between the Myanmar military and the Bangladesh military. There are a number of areas where the two countries may cooperate and work together; the key area being the improvement of relations.

Myanmar’s military can work together with Bangladesh’s military to broaden the scope of its relations and can explore deeper cooperation in areas such as counter-insurgency, counter-terrorism, Bangla-language skills, Burmese-language skills, joint naval and air exercises, and intelligence sharing in combating the traditional and non-traditional threats in the Bay of Bengal region. The two military forces can strengthen mutual cooperation such as training exchanges, intelligence sharing, joint patrolling along the Myanmar-Bangladesh border in countering trans-border crimes such as illegal arms trade, drug trafficking, human trafficking, etc.

Exchanging military delegation between Bangladesh and Myanmar can pave the path in resolving bilateral disputes with each other. Both parties can exchange and share their experience, expertise to deal with some common bilateral problems. Exchanging military training between the two-armed forces can help enhance the operational capabilities of both parties. Combined military exercise, UN peacekeeping operation (UNPKO) training, and disaster management cooperation, exchanging programs, senior-level visits and medical cooperation, sports event, adventure activities, military tourism, joint cycling expedition, and adventure training are some kinds of sectors of cooperation.

For example, Bangladesh’s then Chief Of Army Staff, Gen. Aziz Ahmed, began his four-day visit to Myanmar in 2019. The purpose of the visit was to improve the existing military ties of both countries and find out the scopes of cooperation with each other. General Aziz’s visit to Myanmar was a high-profile military visit from Bangladesh after more than five years. Former Chief of Bangladesh Army Gen. Iqbal Karim Bhuiyan visited Myanmar in 2014 to discuss issues including trans-border crimes and human trafficking between the two countries. Chief of Air Staff Air Marshal Muhammad Enamul Bari along with his five officers left Dhaka for Myanmar in 2019.

On the other hand, U Ne Win, President of the Socialist Republic of the Union of Burma (Myanmar), arrived in Dhaka on 26 April 1974 for a four-day official visit. At the airport, he was received by Bangladesh President Mr. Muhammadullah and Prime Minister Bangabandhu Sheikh Mujibur Rahman. The then Commander in Chief of the Myanmar Air Force, Lt. General Myat Hein, arrived in Dhaka on a six-day visit to Bangladesh in 2011. However, these types of visits of high officials are essential for both Myanmar and Bangladesh to foster the ties for better bilateral understanding.

Myanmar defense officers participated in different training institutions in Bangladesh such as the National Defense College and Defense Service Command and Staff College (DSCSC) in the Past. But these training exchanges must be resumed for ensuring better interest. Thus, Bangladesh and Myanmar should proactively offer more training facilities to each other.

Joint initiatives taken by the two militaries can pave the way to bolster the ties between the two neighbors. Improved ties between the Bangladesh military and Myanmar military can smoothen the ties resolving the long pending issues such as the crisis of displaced persons from Rakhine who are currently living in Bangladesh, maritime dispute, border-related trans-border crimes.

Basically, the members of the armed forces of both Myanmar and Bangladesh should have a frequent exchange of visits, training, and joint exercise. These will reduce mistrust and enhance confidence and understanding. This can also help solve the long pending Rohingya refugee crisis in the region.

On the environmental front, both Bangladesh and Myanmar should make sure that the climate conferences at the global stage should not just focus entirely on climate issues, but also should set practically applicable measures and a constructive framework, with the genuine intention to ensure reduction of environmental deterioration.

For Bangladesh, the only relevant thing that is to be taken into account is that there are immense economic opportunities for Bangladesh within Myanmar. There should be no concern on Bangladesh’s part as to the military running the show in Myanmar. Bangladesh must push for closer ties with Myanmar irrespective of who holds Myanmar’s power. Military setup in Myanmar’s Constituent Assembly remains very strong. Opportunities have emerged for Bangladesh to earn billions from exporting to, and investing in, Myanmar. Therefore, being one of the five neighbors of Myanmar, Bangladesh should try to grab such opportunities, should bolster its relations with Myanmar, and take the benefit of Myanmar’s economic potential through military diplomacy between Bangladesh and Myanmar.

Countries like Bangladesh and Myanmar, which are the major victims of climate change with the worst victimization still awaiting, may work together in order to address the issues related to global environmental deterioration. Besides the major problems of poverty and illiteracy, Bangladesh and Myanmar’s vulnerability to environmental deterioration is very alarming. Basically, Tatmadaw and Bangladesh military can work together to mitigate the risk of regional environmental degradation through joint disaster management systems, operations, initiatives. Cyclone Nargis in 2008 was the best example to understand it. Both coastal countries were affected by this natural disaster. There are ample opportunities for both Myanmar and Bangladesh to work together in reducing the risk and loss of environmental degradation.

The relations between the two countries are the cross-border communication of general people from the two sides of Bangladesh and Myanmar. The people-to-people connection between two sovereign countries must be made the most effective way to progress together and to keep a peaceful relationship between the concerned countries. This factor is particularly important when the concerned countries are neighbors. There must be a smooth and vibrant relationship between the people of both Bangladesh and Myanmar. Basically, both militaries can promote Trade and Commerce with each other.

Being one of the closest neighbours of Myanmar, both countries should maintain a friendly relationship with each other. Bangladesh armed forces must take effective steps to improve the relations with Myanmar armed forces assuring the zero-tolerance policy of the Bangladesh government against terrorists, human traffickers, illegal drug traders criminals.

Myanmar’s military should take effective steps to foster the ties. It must understand that Bangladesh is a peace-loving country and friendly neighbours. Bangladesh believes in peaceful coexistence. Thus, engagement with Bangladesh would be beneficial for Myanmar also. Military ties between the two neighbouring countries can assure peace, harmony, regional stability, regional greater interest, etc. in the whole regions (South Asia and Southeast Asia)