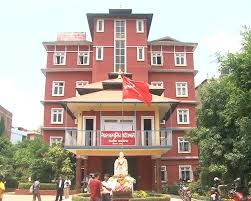 The Association staged the sit-in at the UML Party Office demanding secure and appropriate alternative to continue their business. It has been picketing the Office of the different political parties as per their second round of protest.

Earlier, the traders had organized various protest programs under the first phase.

The demonstrators also called for a separate law to govern their business, issue the professional identity card, stop misbehaving to the self-employed traders, and maintain peace and security in the business areas, among others.

The demonstrators gathered at Kalanki and organized a rally while going to the UML Party Office, Balkhu. During the picketing the traffic at Balkhu area was disrupted.

The workers close to the National Self-employed Trade Association and the Joint Trade Entrepreneurs´ Association Nepal also have been participating in the protest.

The government has since February 26 banned street vendors from doing business on the footpath claiming that it affected the movement of pedestrians.

General Secretary of the Self-employed Trade Workers Association, Maya Gurung, claimed that thousands of such traders are dependent on street vending for livelihood. She said the government should ban street vendors from operating from the footpath only after giving them the right alternative.

The government should also stop misbehaves against the self-employed traders by maintaining peace and security in the business sector.