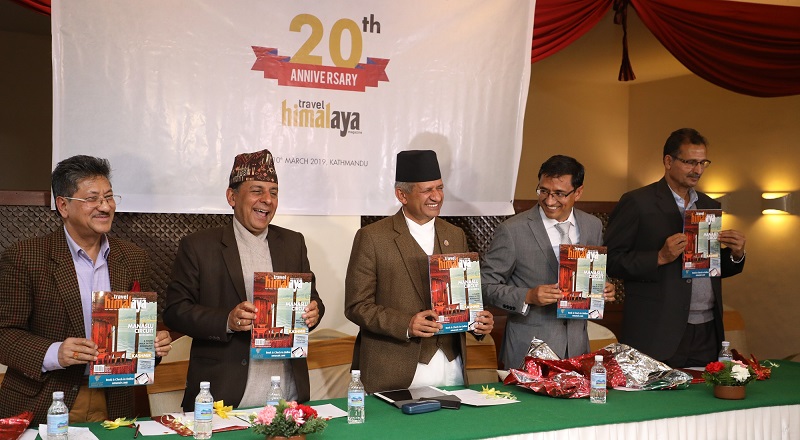 Kathmandu, March 11 . It was a gala affair as Travel Himalaya magazine celebrated their 20th anniversary of publishing and promoting the land of the Himalaya. The event was held at the Hotel Shangrila in Kathmandu.

Publisher Raja Ram Giri welcomed a standing room only crowd that overflowed the meeting hall at the hotel. The guests came to congratulate Mr Giri on his accomplishments, but also learned more about what was needed for Visit Nepal 2020 to reach its goal of 2 million visitors.

Chief Guest was the Right Honorable Pradeep Kumar Gayawali, the honorable minister of foreign affairs who spoke and congratulated both Mr. Giri and the staff of Travel Himalaya.  Special guess include ex-Minister and Member of Parliament Mr. Agni Prasad Sapkota.

Speaking on behalf of the four foreign ambassadors who were present was His Excellency Manjeev Singh Puri of India. He praised Mr. Giri for his presentation, especially in offering simply solutions to problems in tourism. Also present were the ambassadors for Australia, Bangladesh and Israel.

The audience looked like a who’s who of the tourism industry. Almost all of the major airlines that serve Nepal were also present for the occasion.

The program concluded with a time for refreshements as well as visiting and making new acquaintances.

‘’Small things matter, ‘’ said Mr. Giri, reflecting upon the future of tourism in Nepal. ‘’There is so much we can do that cost next to nothing that will greatly enhance the Nepal experience for our targeted 2 million visitors in 2020.