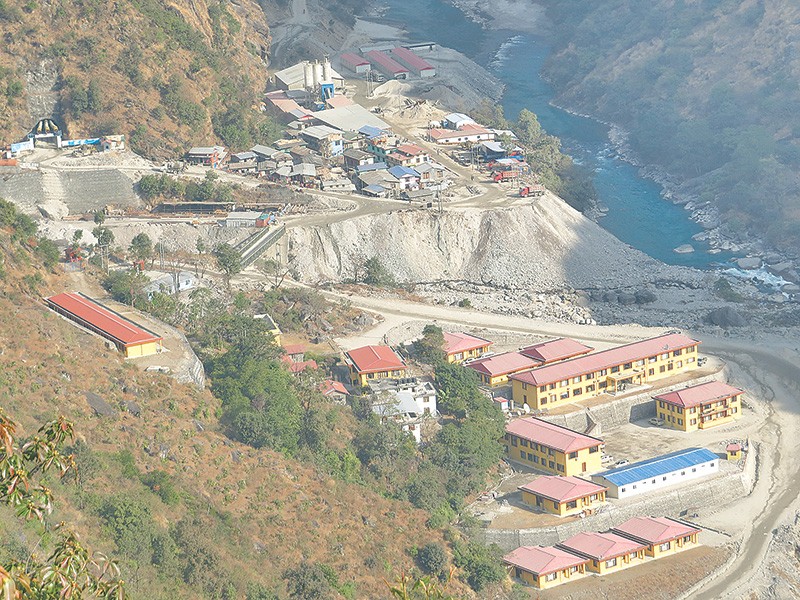 Minister Pun, who has been putting in meaningful efforts for the completion of this project, had reached Dolakha, the district where the project is located, on Friday.

The Minister made an on-site visit and acquired information about the work progress of the under-construction project including the reservoir site, tunnel, the upper penstock and lower penstock on the occasion.

He stayed at the project site for about three hours and observed the construction works with keen interest.

In course of the inspection, he said he has come to the project site along with the high officials of the Nepal Electricity Authority and the project for the project’s monitoring, observation, resolving the problem and facilitation.

The Minister had taken information about the project’s progress from the project chief Dinesh Jung Rana and chief executive officer Bigyan Shrestha. He stressed on the need of completing the Tamakoshi Hydroelectricity Project within the stipulated timeframe.

Talking to media persons after the observation of the project, Minister Pun expressed the determination that this national pride project would be completed within the set deadline, reiterating that it would be brought into operation by coming Mid-December.

“We have serious concern in this project as it is a very important project. I have focused all my attention to completing the project in time and maintaining its quality of work. I am confident of the project’s completion within the stipulated timeframe,” he said.

He added that this project proved that Nepalis are themselves capable of constructing big projects by mobilizing indigenous labour, skills and capital.

The Energy Minister described the project as an important model project of Nepal.
“There was some problem some time back due to the vertical shaft. As per our direction, Andritz Hydro of Austria and Indian company Texamo worked collectively for the construction works of two vertical tunnels. Remaining works are going on with a target of completing them by the coming mid-November,” he said.

98 percent works complete
With the resolution of problems emerged during the construction, it has neared final stage. The construction is in the final phase with its 98 percent completion.

Two companies- one from Austria and another from India- are setting up infrastructures for the construction of the project. RSS