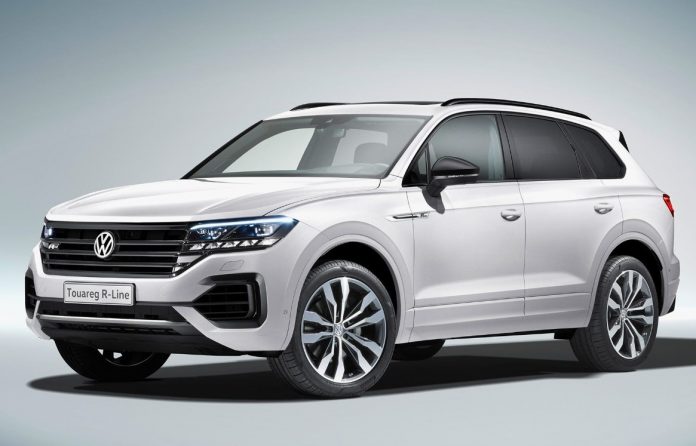 The Volkswagen Touareg was developed as a joint venture project by Porsche and the Volkswagen Group, involving the Audi and Volkswagen brands. The name “Touareg” literally means “free folk” and is the name of a nomadic tribe from the Sahara, a North African ethnic group. The designer “Frank Bruese” has designed the new Touareg R-Line which shares the same platform and much technology from its close cousins Audi Q7, Porsche Cayenne, Bentley Bentayga and Lamborghini Urus.

The Touareg is a large-sized fun-to-drive luxury SUV produced by the German automaker Volkswagen Group since 2002 at the Volkswagen Bratislava Plant. The Volkswagen Touareg which was officially launched in Nepal in 2010 is an already popular Volkswagen model preferred by the elite group of the society. Ever since its launch in 2010, the Touareg has become the new benchmark setter in the SUV segment, with its sheer power and luxury it has never failed to impress the audience and has raised the level of excitement among the car enthusiasts.

The special features of Touareg-R include Active Air Suspensions, All-wheel Steering, ABS Plus, and Differential Lock. The Air suspension can raise the ride height on command which provides more driver comfort due to the reduction in noise, harshness, and vibration on the road for achieving a smooth and constant driving quality. The advantage of having all-wheel steering in a higher speed situation is that the vehicle will be more stable, like when changing lanes, and lean less when going through a high-speed corner. The differential lock forces all wheels to spin at the same speed, regardless of traction. With features like these, the company claims that no terrain is insurmountable for a car of its stature.

The Touareg-R comes with stylish bold exterior with fresh & vibrant design. The dashboard enhances the premium appeal of the car having infotainment system encoded with gesture feature. It also comes with features like frameless interior rear view mirror, auto dimming and auto foldable side mirrors, sensor controlled luggage compartment with 810 L Boot Space. Equipped with the connectivity of a new era and a pioneering fusion of assistance, comfort, lighting and infotainment systems, the Touareg-R points the way to the future.

Capable of both impressive performance as well as ultra-low emissions, Touareg-R can hit 0-100 Kmph in a matter of 5.9 seconds with a top speed of 250 kmph. The new flagship takes a top position in the premium class SUV segment with its expressive design, its innovative operating, convenience and safety systems, as well as in the high quality of its materials and craftsmanship. The Touareg receives a five-star safety rating from Euro NCAP, including 89% and 86% for adult and child occupant protection respectively. With all these tech stacks and features, the company claims that Touareg-R is just not a normal Volkswagen; it’s a Boss-Wagen with a complete luxury packaging.

The company has kept the starting price of new Touareg-R at 3.25 crore which will be competing against BMW X5, Range Rover Sport etc.

Volkswagen means “People’s car” in German language.  Volkswagen is the German automobile manufacturer with numerous brands under its group. Some of them are Bentley, Skoda, Lamborghini, Audi, Bugatti, Seat, Porsche, Scania, MAN etc.

Volkswagen was originally founded in May 28, 1937, Berlin, Germany by the Nazi trade union, the German Labor front. First model was Legendary Beetle introduced in 1937 AD. It has 136 production plants spread across 27 countries worldwide with daily production of 26,600 cars. The cars are exported to more than 150 countries. It was the largest producer of cars in the world for past couple of years.