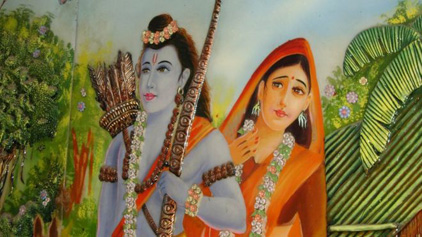 BBC February 8- Indian lawyer Chandan Kumar Singh recently stunned many Indians when he tried to sue popular Hindu god Ram. Mr Singh told the BBC that he took the action because he felt “Lord Ram was unjust to his wife Sita”, and he wanted a court in the eastern state of Bihar to “acknowledge this fact”.

The court wasn’t convinced with his argument and rejected his plea last week, saying it wasn’t a “practical case”. And to add to Mr Singh’s woes, a group of his colleagues have accused him of “seeking publicity”, and one of them has sued him for defamation.

Ram is the hero of the Ramayana, the Sanskrit epic of 24,000 stanzas. He is revered by millions in India and around the world.

Mr Singh is undeterred by the criticism, and believes strongly that he has a valid case. He quotes from religious scriptures to support his argument.

“It’s well known that Ram asked Sita to prove that she was pure after he rescued her from the clutches of the demon king Ravana. He did not trust Sita,” Mr Singh told the BBC.

“Ram’s treatment of Sita shows that women were not respected even in ancient times. I am aware that the case may sound ridiculous to many, but we have to discuss this part of our ancient religious history. I will file a case again because I really believe that Indians have to acknowledge that Ram mistreated Sita.”

Mr Singh also rejected allegations that he was merely seeking publicity. “I filed the case because we cannot talk about respecting women in modern day India when we know that one of our most revered gods did not treat his own wife with respect,” he said.

But he admits the reactions have taken him by surprise. “I expected some objection but did not anticipate that my colleagues would turn against me. I was only talking about justice and had no intention of hurting anybody’s religious sentiments,” he said.

“Is it wrong to seek justice for women? The court’s acceptance of my plea would have sent a good message that respecting women was important to Indians.” But his colleagues are not convinced.

Lawyer Ranjan Kumar Singh told the BBC that the plea “insulted Hindus”. “He has a history of filing publicity-seeking pleas. But this time he has gone too far. He has hurt our sentiments,” he said. Ranjan Kumar Singh has also filed a defamation case against his colleague.

“We have also requested the bar council to cancel his licence to practice law. All lawyers are united against Chandan, he needs to learn a lesson,” he told the BBC.

“We see Ram and Sita as one and worship them as a couple, there is no question of us believing that Ram mistreated Sita,” Ranjan Kumar Singh added.

But Chandan Kumar Singh insists that “his fight isn’t against Ram”. “I too worship Ram. I am a practising Hindu. I apologise to people if they feel hurt, but I cannot ignore the fact that Sita wasn’t respected,” he said.

“Environment for all Nepalis to invest in hydro projects enabled, “assures...