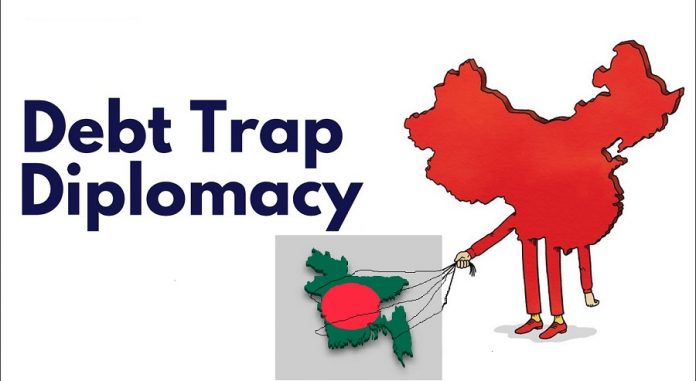 Bangladesh, the second highest recipient of China’s investment in South Asia after Pakistan, imports the highest volume of goods from China making it Bangladesh&#39;s largest trading partner. This is the beginning of the story where China offers Bangladesh financial assistance and development experience for its ‘big-ticket megaprojects’ to fulfill its vision-2041- a well-crafted dream to be a developed country.

The overwhelming funding from China makes the critics pessimistic to ask a question, citing the example of Hambantota in Sri Lanka, “Is China trying to bait Bangladesh with its ‘debt-trap’ diplomacy?” ‘Debt-Trap Diplomacy’, a widely used narrative against China, is thought to be originated from ‘infrastructure war’ between China and Western Allies. It is an apple of discord if China really has any ‘Machiavellian Strategy’ as Chinese projects in Bangladesh are too fragmented to achieve such cunning strategic objectives.

Once ‘The Sleeping Giant’ now the ‘Second Economic Superpower’, China follows ‘socialist ideology’ in political affairs but adopts ‘open market policy’ with the name ‘market socialism’. The historical data demonstrates that China always has strong affiliation with South Asian countries because of the region’s ‘Big Bazar’. The geo-political eminence &amp; commercial noteworthiness of Bangladesh has made China pay special heed to catch this money-making market.

To utilize the potential of becoming ‘economic hub’ of South Asia, Bangladesh needs external funding for its ‘flagship development programs’ financing of which goes beyond domestic affordability. This leads Bangladesh to look for external funding options with conducive conditions. Bangladesh’s loss of substantial financial assistance from global lenders in the recent years e.g., World Bank’s rejection to finance the Padma Bridge, and the attractive nature of China’s investment created a gateway for China to step into
Bangladesh’s economy. On the other hand, China, as a part of its external orientation, comes closer to Bangladesh by affiliating the country with different China-led regional platforms e.g., AIIB, BRI etc. Sino-Bangladesh relations, started in 1976, were limited to trade deals until the first decade of the 21st century.

The bilateral relations have experienced two different phases before and after the initiation of the BRI. The cozy relations turned into strategic partnership after 2010 when the countries signed a number of trade, transit and defense procurement agreements. Both countries are working to alleviate the huge trade-deficit by establishing the ‘Free Trade Zones’. China is trying to prove itself as Bangladesh’s ‘time-tested friend’ by entwining diplomatic, defense and economic ties.

Though China and Bangladesh have distinct political and social status quo but collaborative efforts brought them closer. China’s non-intervention principle to the domestic affairs of its partners leads Dhaka to welcome more and more investment from Beijing. As an emerging economy, Bangladesh requires ‘hefty investment’ to tackle its socio-economic problems which is clinched by China.  On the other hand, Bangladesh is all-important in China’s strategic calculus since it can connect the southeastern landlocked province of China. Besides, the cheap workforce of Bangladesh offers China an opportunity to relocate its
‘sunset industries’. Yet, critics give a contentious look on this relationship by denouncing China’s role in resolving Rohingya crisis.

According to the World Bank and IMF, that a country will cross the danger mark if its external debts exceed 40% of GDP ensures Bangladesh is in ‘safe zone’ as its total foreign loan is less than 15% of GDP. ‘Flow of External Resources into Bangladesh’, a publication of the Ministry of Finance, reported total foreign loan outstanding of the country was $4409.51 crore depicting per capita loan is around $278 in 2019-20 fiscal year.

This shows clearly how reality begs to differ from the misconception that Bangladesh is overburdened with external debts. Another misreading that Bangladesh is going to be a victim of ‘China’s debt trap’ pointing finger to the growing Chinese investment also doesn’t reflect the ground reality. Bangladesh’s total external debt, in the fiscal year 2019-20, consists of 38% from WB, 24.5% from ADB, 17% from JICA, 6.81% from China, 6.14% from Russia and 1.3% from India. This self-explanatory data shows that Bangladesh is travelling along the right trajectory in contrast to aforementioned misconceptions.

The strategic advantage of cross-border trade tilted Bangladesh exponentially towards China which leads critics say that too much reliance on China’s money will make the country beholden to China. But Bangladesh’s diplomatic maneuvers of the last few decades demonstrate that the country has been striking a fine balance among the donors. By pumping money to Bangladesh, China is actually trying to take the longstanding relations to a new height. Albeit, there is a narrative that Bangladesh is going to be a victim of payday loan diplomacy’, but the counter narrative explains how Chinese ‘soft-loan’ reduces the pressure of western donors for economic and political reforms.

Bangladesh perceives Chinese investment as a welcome addition to existing sources along with creating a competitive environment. Before reaching to foregone conclusion by tagging China’s debt trap with Bangladesh, it needs to be kept in mind that the funding options for Bangladesh are very limited. Besides, a loan becomes burden if it is not optimally utilized. To date, all the Chinese-funded projects in Bangladesh have been proved to be financially viable. There is no such instance where Bangladesh has accepted all the diktats, while signing financial agreement, blindfolded.

The current stronger position of Bangladesh, in terms of external debt from China, will alter with the rise of Chinese investment, but long-run return will be more attractive if funds are effectively utilized. Bangladesh needs to negotiate carefully before inking any financial agreement, focus more on soft-loan and ensure timely implementation of projects. Along with taking funds for infrastructural boost, Bangladesh may also leverage the development experience of China to create win-win situation. Not to mention, the macro- economic management policy of Bangladesh is prudent enough to avoid China’s ‘Debt-Trap’, even if there is any.

(Writer’s Bio: Hussain Shazzad, a strategic affairs and foreign policy analyst, completed his M.B.A from the Department of International Business, University of Dhaka. He can be reached at pksf.shazzad@gmail.com)