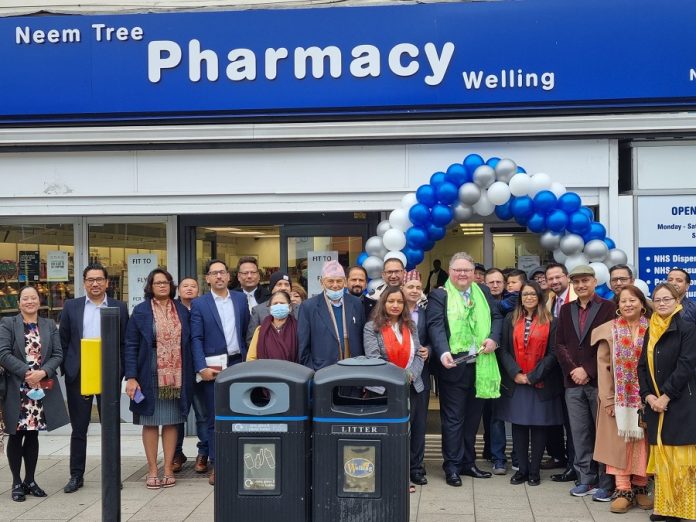 Kathmandu, Oct 26. Neem Tree Pharmacy in Welling was formally opened by the Mayor and had an official ceremony to mark the occasion.

Neem Tree is an expansion of a group of pharmacies run by the Kandel Group. Along with three other pharmacies in the South East London area, the Kandel Group runs Woolwich Late Night Pharmacy – an award winning Pharmacy which has been recognised for the amazing work it has done throughout the pandemic, supporting the NHS with it’s vaccine clinic and NHS hotel quarantine service.

To mark the occasion, the Pharmacy held an opening ceremony on the 23rd of October, which ran from 11am to 1pm. Along with distinguished guests, the Managing Director of the Kandel Group, Rajen Kandel and Mayor Councillor James Hunt were in attendance. After Rajen had formally opened the event with a welcoming speech, the Superintendent Pharmacist & co-owner, Mrs Bimala Sapkota introduced the pharmacy and the Pharmacy team, before congratulatory messages were delivered from local community leaders.

The guest of honour, Mayor Councillor James Hunt, then gave his speech. He spoke about how much a pharmacy of this quality was needed in the local area, and his delight that the Kandel Group had taken over the former Boots store. He expressed his deep respect and appreciation for the Nepalese community – especially praising their community and entrepreneurial spirit.

He thanked the pharmacy for serving the local area and said, ‘The last 18 months have been terrible for everyone, but the way that Community Pharmacy has been there to provide essential medicines and consultations has been vital’. He also spoke of how many resources were available and commented on the family environment that the pharmacy fostered.

Among the other guests in attendance were the President and Secretary of Bexley Nepali community, Mr Ananda Dharel and Mr Kedar Thapaliya, and the Vice President of Tamudhee South East, Mrs Bindu Gurung. The Director of Home Instead Bexley Care Services, Mr Fatta Thapa, also attended and congratulated the team on the inauguration of the Pharmacy and spoke about working together for the betterment of the local community.

The Mayor then cut the ribbon and formally declared the pharmacy open for business. As he did so, he commented that customers were already pouring in, marking Neem Tree Pharmacy, Welling as a success on it’s very first day. All the guests were served with refreshments and the programme was coordinated by co-owner Mr Bishal Sapkota.