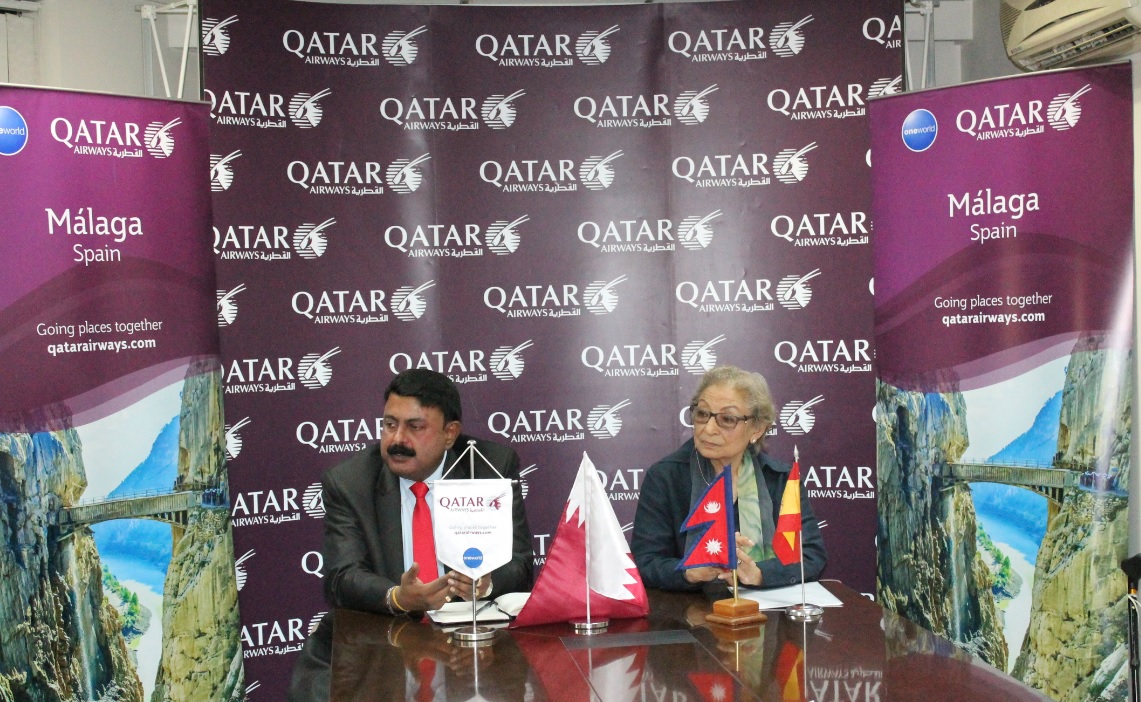 The first Qatar Airways direct non-stop flight from Doha to Málaga touched down on 13 June at Málaga-Costa del Sol Airport, where it was welcomed by a celebratory water cannon salute.

Mrs. Shrestha  explained to the media about the beautiful city in Spain  “Málaga is a beautiful and cosmopolitan city nestled along Spain´s Costa del Sol in the southern Spanish region of Andalusia. The charming coastal city is known for its magnificent climate all year round. Málaga offers a wide variety of activities for visitors to enjoy, such as exploring the historic Roman fort, basking on one of Málaga’s wonderful Mediterranean beaches or visiting one of its many museums.”

Qatar Airways  Country Manager Mr Jay Prakash Nair , said: “We are truly delighted to launch direct services to Málaga, the jewel of the Costa del Sol and our third Spanish gateway. Málaga offers so much for holidaymakers to enjoy, from its magnificent beaches to its spectacular Andalusian architecture. Qatar Airways’ new direct services to Málaga are timed perfectly to coincide with the summer holiday season, allowing Qatar Airways  to connect more visitors to this unmissable destination.

“This new route also reflects the strength of our commitment to the Spanish market, which we currently serve with direct double-daily flights to both Madrid and Barcelona. We look forward to bringing travellers to Málaga, and enabling them to experience all the delights this charming city has to offer.”

The four weekly seasonal flights to Málaga-Costa del Sol Airport will be operated by a Boeing 787 Dreamliner aircraft, featuring 22 seats in Business Class and 232 seats in Economy Class. Passengers on board will be able to enjoy the airline´s superior entertainment system, Oryx One, offering up to 4,000 entertainment options to choose from.

Qatar Airways currently holds the title of ‘Airline of The Year’ as awarded by the prestigious 2017 Skytrax World Airline Awards. In addition to being voted Best Airline by travellers from around the world, Qatar’s national carrier also won a raft of other major awards at the ceremony, including ‘Best Airline in the Middle East’, ‘World’s Best Business Class’, and ‘World’s Best First Class Airline Lounge’.

Qatar Airways, the national carrier of the State of Qatar, is celebrating more than 20 years of Going Places Together with travellers across its more than 150 business and leisure destinations. The world’s fastest-growing airline will add a number of exciting new destinations to its growing network in 2018, including Thessaloniki, Greece; Cardiff, UK and many more, flying passengers on board its modern fleet of more than 200 aircraft.

Qatar Airways is a member of the oneworld global alliance. The award-winning alliance was named the World’s Best Airline Alliance 2015 by Skytrax for the third year running. Qatar Airways was the first Gulf carrier to join global airline alliance, oneworld, enabling its passengers to benefit from more than 1,000 airports in more than 150 countries, with 14,250 daily departures.

Oryx One, Qatar Airways’ in-flight entertainment system offers passengers up to 4,000 entertainment options from the latest blockbuster movies, TV box sets, music, games and much more. Passengers flying on Qatar Airways flights served by its B787, A350, A380, A319 and select A320 and A330 aircraft can also stay in touch with their friends and family around the world by using the award-winning airline’s on-board Wi-Fi and GSM service.

Qatar Airways proudly supports a range of exciting international and local initiatives dedicated to enriching the global community that it serves. Qatar Airways, the official FIFA partner, is the official sponsor of many top-level sporting events, including the FIFA 2018 and 2022 World Cups, reflecting the values of sports as a means of bringing people together, something at the core of the airline’s own brand message – Going Places Together.