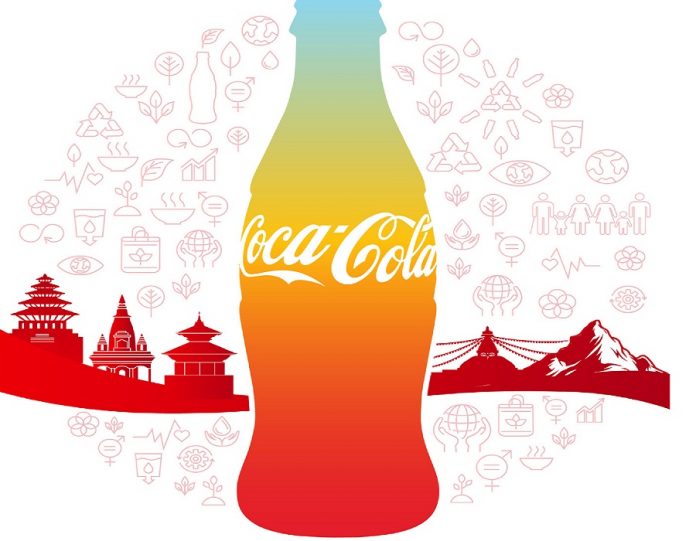 Kathmandu, October 5. Coca-Cola in Nepal, for the first time ever has released a Sustainability Highlights report which show cases the company’s efforts towards an inclusive, sustainable and resilient future during 2020. The report discloses initiatives undertaken for Water Stewardship, Plastic recycling, Carbon reduction, corporate citizenship including the response to Covid-19 that benefits the value chain including youth, women, suppliers and employees.As Coca-Cola moves into a decade of action, it isintegrating the United Nation’s 17 Sustainable Development Goals into its core strategy.

Adarsh Avasthi, Country Director of The Coca-Cola Company in Nepal said, “The Coca-Cola System views sustainability as a prerequisite for business growth. Since 1973, we have been in the business of making Coca-Cola every Nepali’s first choice of refreshment. For over 40 years, we have strived to build a community-driven, customer-focused and sustainable business that is profitable while being socially responsible and making a difference”.

Water is central to the long-term success of Coca-Cola’s business and the health of its communities,the company has taken on the mantle of respecting and protecting water resources while ensuring water security for the nation. In Nepal, Coca-Colahas achieved a water replenishment potential of over 200% through projects like rainwater harvesting, groundwater recharge and watershed restoration partnerships with WaterAid and SmartPaani.This means for every drop of water used in the production of beverages Coca-Cola gives back twice the water used to communities across Nepal.

In 2018, Coca-Cola globally announced World Without Waste, with an aim of collecting and recycling the equivalent of all bottles and cans that it sells by 2030. In support to its global vision, Coca-Cola in Nepal has taken upon many recycling initiatives in order to achieve the “World Without Waste” objectives in the coming decade through its several projects namely Nagarmitra, Recycler Saathi and Refresh and Recycle with partners such as CREASION, Himalayan Climate Initiative, Doko Recyclers and Blue Waste 2 Value.These projects collectively cover 2 municipalities across Kathmandu and 7 municipalities outside of Kathmandu. Along with these projects, Coca-Cola has also collaborated with the Nepal Army for the ‘Mountain Clean Up Campaign” for 2 years. The multi-stakeholder national program is aimed at protecting the mountains and minimizing the effects of climate change in the Himalayas.

Coca-Cola is reimagining their packaging to make it better for theplanet with the light-weighting of Polyethylene Terephthalate (PET) bottles through Affordable Small Sparkling Package (ASSP) technologyto reduce the total PET used across our portfolio.ASSP packagingcreated through design innovation and light-weighting comes in the 250 ml and 500 ml variants.Likewise, the RGB (Returnable Glass Bottles) bottles which are 100% recyclable accounts for 100% recovery from the market other than minimal system breakages.Additionally, Coca-Cola is also working with various suppliers on innovations to reduce our plastic use in secondary packaging

People matter in the Coca-Cola system hence, the 5by20 program was launched in 2010 to achieve the economic

empowerment of 5 million women by 2020 globally. In Nepal, the 5by20 initiative empowers women of the Coca-Cola System and the female retailers through the Shop Training and Resources (STAR) program and so far has impacted over 5200 women retailers across the country.

In efforts to reduce its Carbon Footprint, Coca-Cola Nepal over the years has reduced its energy usage and

decreased dependence on non-renewable sources of energy. For instance, solar-powered streetlights have been installed at both plants inBalaju and Bharatpurand have invested in highly energy efficient equipment and technologies.

Pradip Pandey, Managing Director of Bottlers Nepal Limited “Coca-Cola’s sustainability progress in Nepal is ahead of time and this report is a great start that crowns the system’s efforts during the journey. We have worked to minimize our impact on Nepal’s natural resources while upholding our sustainable business priorities. ESG (Environmental, Social, Governance) will remain core to what do. And we are grateful to the Government, Civil society, NGOs, the youth-led organization and the media who have partnered with us in such initiatives.”

Additionally, in the fight against Coronavirus pandemic, The Coca-Cola Foundation (TCCF) had pledged NPR 80 million towards COVID-19 relief measures to support those who were most impacted across Nepal in 2020. The relief efforts went mainly towards the vulnerable waste workers and the healthcare sector across Nepal with the support of partners Creasion and the Nepal Red Cross Society.

Subisu Conclave to be held on May 15

THE OFFICIAL LAUNCH OF UHEEM COMPLETES